CHANDIGARH:With the increasing number of vehicles and high levels of emission in cities becoming an issue of serious concern, the Council of Scientific and Industrial Research (CSIR) is undertaking a study on the impact of traffic on the health of schoolchildren. 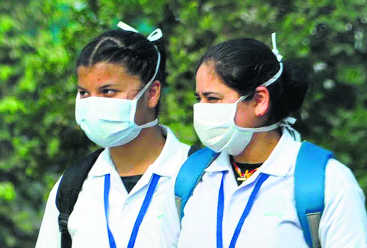 With the increasing number of vehicles and high levels of emission in cities becoming an issue of serious concern, the Council of Scientific and Industrial Research (CSIR) is undertaking a study on the impact of traffic on the health of schoolchildren.

While regular exposure to traffic-related air pollution is known to have both short-term and long-term effect on human health and impacts respiratory, cardiovascular and neuro-psychological functions, there is also growing evidence worldwide that it adversely impacts academic performance.

The project is being undertaken by the CSIR’s Central Road Research Institute and will involve data collection and statistical surveys over a period of time with regard to traffic density, roads infrastructure and pollution level at multiple spots on the ground.

With ever increasing number of vehicles on roads and greater distance to be travelled between homes and schools, children are exposed to higher level of air pollution for longer durations, having adverse health effects, said scientists. Respiratory disorders like asthma and some eye-related allergies are common.

“In addition, anthropological as well as geographical and meteorological factors that hamper the dispersion of particulate matter present in the air also have to be considered,” a scientist said. “Vehicle emissions, dripping oil, road dust and tyre fragmentation result in an increase in carbon monoxide, sulphur dioxide, nitrates and suspended particulates in the air,” he added.

A scientist referred to a paper published earlier this year by the US National Bureau of Economic Research, which indicated that when students switch to schools with higher levels of traffic pollution, they tend to experience decline in test scores, more behavioral incidents and more absents. Air pollution harms cognitive performance and poses a major threat to health worldwide, the paper noted.