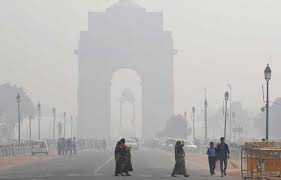 According to the Central Pollution Control Board (CPCB) data, the overall AQI in the city was 328.

As the impact of rain subsided, Delhi's air quality deteriorated further and slipped into the 'very poor' category on Thursday, authorities said.

They said unfavourable meteorological conditions have slowed down the process of dispersion of pollutants.

According to the Central Pollution Control Board (CPCB) data, the overall AQI in the city was 328.

On Tuesday, Delhi recorded its lowest pollution levels since October last year as heavy rains lashed the city and the wind speed picked up. The national capital's air quality was recorded in the 'satisfactory' category.

From Wednesday, the air quality started deteriorating again and slipped into the 'poor' category before falling into 'very poor' category.

On Thursday, 27 areas in Delhi recorded 'very poor' air quality while it was 'poor' in seven areas, the CPCB said.

The overall PM2.5 level—fine particulate matters in the air with a diameter of less than 2.5 micrometers—in Delhi was 167, while the PM10 level was 280, it said.

But as the impact of rains subsided, pollution levels again started to rise. It is expected to oscillate between 'moderate' and 'poor' categories for the next three days, authorities said.

The Centre-run System of Air Quality and Weather Forecasting (SAFAR) said the overall air quality is likely to deteriorate now.