NEW DELHI: A massive fire destroyed the National Museum of Natural History in FICCI building in central Delhi in the wee hours today, with many exhibits like herpetological specimens and taxidermied animals gutted. 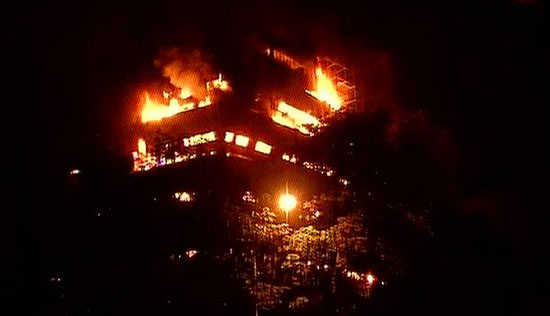 A massive fire destroyed the National Museum of Natural History in FICCI building in central Delhi in the wee hours today, with many exhibits like herpetological specimens and taxidermied animals gutted.

Six fire officials were rushed to a hospital after they inhaled excessive smoke during the four-hour operation to control the blaze that broke out at 1.45 am.

Their condition is said to be stable now, officials said.

Environment Minister Prakash Javadekar, who visited the spot, described the fire mishap as "unfortunate" and ordered a safety audit of all museums under his ministry.

"This is unfortunate...Museum of Natural History is a national heritage. Thousands of exhibits were there and thousands of people visit the museum everyday," he said, adding that officials were ascertaining the extent of the damage and ways to restore it.

He said in the next two days the extent of damage at the national museum will be known, adding that efforts would be made to restore whatever is possible.

There were allegations that fire safety equipment and sprinklers did not work when the fire broke out.

The fire broke out on the top floor of the museum, located in FICCI Building in Mandi House, where some repair work was underway and quickly spread to all other floors of the building.

As many as 35 fire tenders were pressed into service. It took firefighters more than four hours to douse the blaze after which a cooling operation was launched which lasted for another few hours, a fire official said.

Many exhibits like taxidermied (stuffed) animals and specimens were gutted in the fire.

The cause of the fire is yet to be ascertained, a senior police official said.

There were not too many people in the building, which was evacuated by the time fire officials reached the scene.

Javadekar said the museum was operating out of a FICCI property.

"This is a rented property. It’s not the Ministry's property, but a FICCI property. Therefore, we have limitations. The issue is that this is a real loss and we will assess the loss when the building is again handed over to us. We will see how the recovery plan can be made," he said.

"The fire personnel are looking after it. But we will assess the damage as soon as they hand it over to. We will see how this can be restored. We will be able to get the details in two days and then chalk out a strategy," he said.

The Minister ordered a safety audit of all museums under his jurisdiction.

"I have given orders to conduct a safety audits of museums under our jurisdiction, so that loss of precious artefacts and exhibits can be avoided," he said.

Established in 1972, the National Museum of Natural History in New Delhi is one of two museums focusing on nature in India. It functions under the Ministry of Environment and Forests. —PTI/TNS