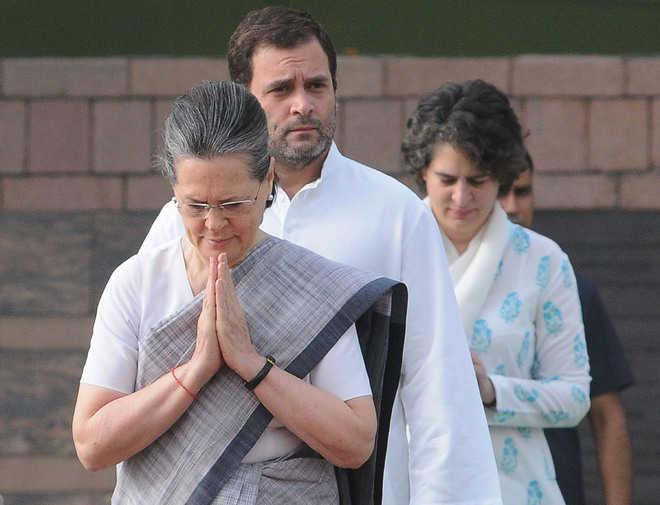 Congress chief Sonia Gandhi with her children Rahul and Priyanka.

Gandhis will now get Z-plus security and will be guarded by CRPF personnel instead of the elite SPG commandos. The decision to withdraw the SPG comes 28 years after the three were covered by the elite security umbrella on October 15, 1991.

This coverage followed a crucial amendment to the SPG Act 1988 by the then PV Narasimha Rao-led Congress government whereby SPG security was extended to not just the sitting PM, as was the case until Rajiv Gandhi’s assassination by the LTTE in May 1991, but also former PMs and the immediate family members of incumbent and ex-PMs.

The Congress slammed today’s decision saying it was the “result of PM Narendra Modi and Home Minister Amit Shah’s personal hatred for the Gandhis and their politics of vendetta”. The Opposition party hinted at contesting the move and wondering how the government could amend the provisions of the SPG law without bringing the same to Parliament.

“We will consult appropriate quarters and see what needs to be done to ensure the rule of law prevails,” Congress spokesperson Randeep Surjewala said, daring the PM and Shah to explain why the orders for SPG withdrawal came from the Home Ministry, and not the Cabinet Secretary, who oversaw the SPG law.

The Congress also mentioned four letters the SPG wrote to Rahul, citing threat to him from Khalistani and Islamic militants, Naxal outfits and ultras in the northeast and asked, “What has changed in 60 days for the recently cited threat perception to stop holding?”

1985: Special Protection Group, an elite group of commandos, is formed to protect the Prime Minister in the wake of the assassination of former Prime Minister Indira Gandhi

1988: The SPG gets a statutory backing with the Parliament passing the SPG Act to protect the Prime Minister

1991: Then Narasimha Rao led Congress government amends the SPG Act 1988 to extend the security umbrella beyond the sitting PM. Amended law covers any former PM and also immediate family members of the sitting PM and former PM for ten years until the PM demits office

2003: Then Atal Behari Vajpayee led NDA government amends the SPG Act again and revises the 10 year security period saying one year cover will be provided and beyond one year any extension would be based on a review of threat perception by the Central government.

The Act says there shall be an armed force of the Union called the Special Protection Group for providing proximate security to the PM and the members of his immediate family; any former PM or to the members of his immediate family for one year from the date on which the former PM ceases to hold office and beyond one year based on threat perception review by the Centre.

A big thank you to all my brothers and sisters in the SPG who worked tirelessly to protect me and my family. Thank you for your dedication, your constant support and for a journey filled with affection and learning. It has been a privilege. All the best for a great future — Rahul Gandhi, Congress leader