NEW DELHI:GSAT-6, the military satellite launched today, will allow the Army to ramp up the speed and accuracy of its striking capabilities, besides providing a much clearer real-time battlefield picture. 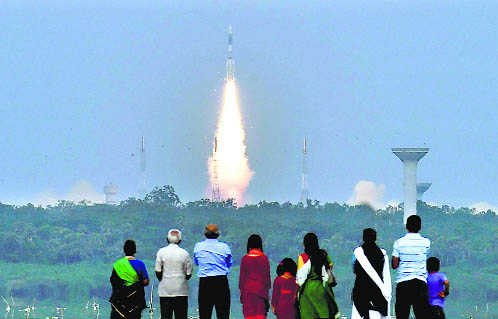 GSAT-6, the military satellite launched today, will allow the Army to ramp up the speed and accuracy of its striking capabilities, besides providing a much clearer real-time battlefield picture.

It will allow a connection among all Army regiments for seamless real-time flow of two-way information, data, videos and even transmission of images captured through night-vision cameras.

In other words, it will connect the last of the soldiers with his commander. A mix of handheld devices and laptops will serve as nodal points. The footprint of the satellite is pan-India, sources say.

Army’s accuracy in undertaking strikes will be enhanced due to seamless integration with attack helicopters and fighter jets of the Indian Air Force.

There will be real-time data and video sharing among tanks on the ground, IAF aircraft in the sky and advancing infantrymen. Commanders on the field and Generals sitting in war-rooms will be seeing the same live pictures as the entire battlefield will be connected seamlessly.

The data will be beamed across laptops using a mix of satellites and radio communication. All this will be done at a very high encryption level so as to prevent snooping.

In August 2013, India launched GSAT-7 (or Rukmini), its first military satellite to keep an eye on the Indian Ocean and Malacca.

Today's GSLV-D6 launch followed the successful launch in January last year of GSLV-D5 with a made-in-India cryogenic upper stage (CUS) engine that put the 1,860-kg GSAT-14 in the orbit. That was ISRO's first success with a locally made CUS after years of struggle to perfect the technology.

Addressing colleagues at the ISRO spaceport in Sriharikota after the launch, ISRO chief Kiran Kumar said, "It has been proved that the successful launch of GSLV-D5 last year was not a fluke." (with inputs from Shubhadeep Choudhury)