CHANDIGARH: A study by the Snow and Avalanche Studies Establishment (SASE) has revealed that snowfall in the mountain ranges has decreased while rainfall has increased of the past 25 years. 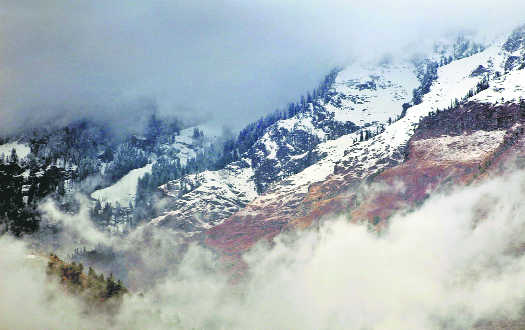 Affirming that the impact of global warming is evident over north-western Himalayas in the form of rising maximum and mean temperature across all zones, a study by the Snow and Avalanche Studies Establishment (SASE) has revealed that snowfall in the mountain ranges has decreased while rainfall has increased of the past 25 years.

Published in February, the study is authored by HS Negi, Neha Kanda, MS Shekhar and Ashwagosha Ganju from SASE, a laboratory under the Defence Research and Development Organisation. Data generated from 16 observatories located in three zones classified as Lower Himalayas, Greater Himalayas and the Karakoram Himalayas on the basis of latitude, was used.

While Karakorams and north-western Himalayas have experienced overall warming in the last 15 years (2001-2015), on the contrary, maximum and mean temperature trends during the last 15 years depict cooling in some zones of the lower and greater Himalayas. “This could have resulted from increased aerosol emissions by anthropogenic activities as aerosols by virtue of their absorbing nature do not allow much of incoming solar radiation to reach earth’s surface thereby leading to cooling,” the authors observe.