NEW DELHI: Life has come full circle for Congress leader P Chidambaram and that too in less than 10 years. Flashback to June 2010—The Congress-led UPA-II was in power at the Centre and Chidambaram was the Union home minister. 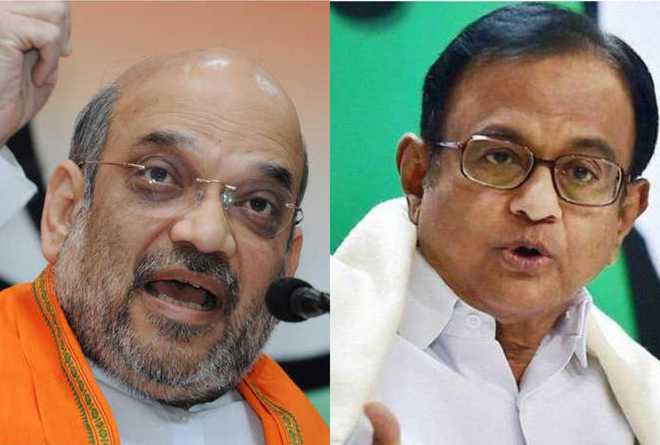 Vibha Sharma
Tribune News Service
New Delhi, August 22
Life has come full circle for Congress leader P Chidambaram and that too in less than 10 years.
Flashback to June 2010—The Congress-led UPA-II was in power at the Centre and Chidambaram was the Union home minister.
Investigating agency CBI had alleged that the then Gujarat home minister Amit Shah was evading arrest in the encounter case of Sohrabuddin Sheikh. Shiekh was a criminal, who had several pending cases against him, and had been killed in police custody in an alleged encounter in 2005.
Allegations against Shah included that the encounter had been staged at his behest.
After lying low, in 2010, Shah made a dramatic entry at the State BJP headquarters for a press conference where he claimed innocence and political vendetta against him. He slammed the Congress and the CBI and called all charges against him “fabricated”.
At this point, he was whisked away to the residence of a CBI judge, who remanded him to judicial custody for 13 days. Earlier, he had submitted his resignation as home minister from the Cabinet of then Gujarat chief minister Narendra Modi.
Cut to August 2019—the Narendra Modi government 2.0 is in power. As the CBI homed in on Chidambaram in INX media case, the former home minister made a dramatic entry at the Congress headquarters late last evening, claiming innocence and “political vendetta”.
He was subsequently taken into custody after a dramatic turn of events, with CBI officials climbing the walls of his posh residence to arrest him.
Shah is now the Union Home Minister—in charge of the key North Block ministry.
Incidentally, the CBI and the ED do not come under the purview of the Home Ministry. The CBI is under the Prime Minister while the ED is under the Finance Ministry.
The Congress called Chidabaram’s arrest—who was, with portfolios like Home and Finance, one of the most powerful ministers in the 10-year UPA-rule—political vendetta. This is the same charge the BJP had levelled against the Manmohan Singh government when Shah was investigated in the Sohrabuddin case.
On the direction of the Supreme Court, the case was transferred to the CBI in January 2010. In July 2010, Shah was arrested by the CBI on the charges of murder, extortion and kidnapping.
When he applied for bail, the CBI opposed the move in the Gujarat High Court arguing that he would use political influence to tamper with the evidence and threaten witnesses. Three months later Shah was granted the bail and subsequently externed from Gujarat, barred from entering the State where he had been home minister for two years.
It is said that Shah used these two years gainfully—understanding the BJP and the RSS at the national level. He travelled across the country and Uttar Pradesh, where the BJP saw huge gains in 2014, understanding national politics and caste-combinations—paving the way for Modi’s entry at the Centre.
During the time when Parliament was in the session, he would often be seen in the office of Arun Jaitley, the then leader of opposition in the Rajya Sabha.
“He had few friends in the party. Even the media avoided him (Shah) because of image the Congress had built of him.
Though the BJP declared that Shah was innocent and was being harassed by the Congress-led government to hit back at the saffron party, he did not have many people he could turn to in those days,” says a political analyst.
Shah was cleared of all charges after the Narendra Modi government swept to power in 2014.
SHARE ARTICLE