NEW DELHI: Taking their robust bilateral ties to a new level, India and Japan on Saturday inked a number of pacts in key areas of defence and nuclear energy as well as building of first bullet train network between Mumbai- Ahmedabad at a cost of about Rs 98,000 crore. 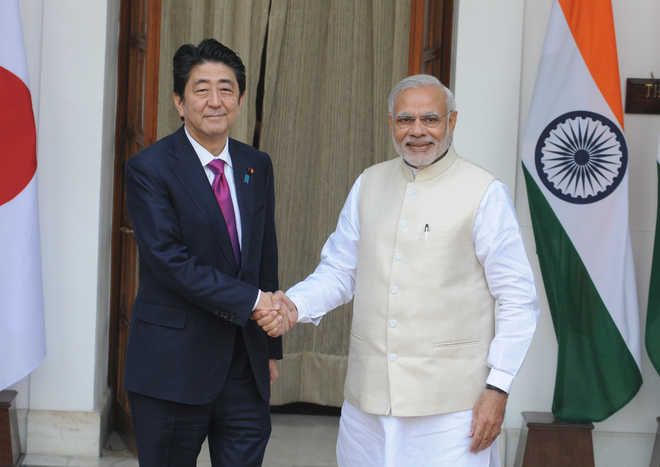 Taking their robust bilateral ties to a new level, India and Japan on Saturday inked a number of pacts in key areas of defence and nuclear energy as well as building of first bullet train network between Mumbai- Ahmedabad at a cost of about Rs 98,000 crore.

The strategic pacts were inked after the summit between Prime Minister Narendra Modi and his Japanese counterpart Shinzo Abe during which they also discussed international and regional issues of mutual importance including UN security reforms.

Addressing a joint press meet with Abe, Modi said, "No friend will matter more in realising India's economic dreams than Japan" while describing Abe as "a personal friend and a great champion of India-Japan partnership".

Referring to the pacts signed, Modi said, "No less historic is the decision to introduce High Speed Rail on Mumbai-Ahmedabad sector through Shinkansen known for speed, reliability, safety", noting that Abe's extraordinary package of approximately $12 billion and technical assistance, on very easy terms, for this project was greatly appreciated.

"The memorandum we signed on civil nuclear energy cooperation is more than just an agreement for commerce and clean energy. It is a shining symbol of a new level of mutual confidence and strategic partnership in the cause of a peaceful and secure world," Modi added.

The bullet train network will link the India's financial hub Mumbai with Ahmedabad, the capital of Modi's home state, Gujarat. Bullet train between the two cities will cut travel time on the 505 kilometre route from eight hours to around three. The approx. cost of the project is estimated to be around Rs 98,000 crore.

The two sides also inked agreements - one concerning the Transfer of Defence Equipment and Technology and another related to Security Measures for Protection of Classified Military Information.

Terming defence pacts as "decisive steps in our security cooperation", Modi said they will deepen the defence relations and promote defence manufacturing in India.

"This builds on our decision to expand staff talks to all three wings of the Armed Forces and make Japan a partner in Malabar Naval Exercises," he added.

The two leaders also issued a joint statement on 'India and Japan Vision 2025: Special Strategic and Global Partnership Working Together for Peace and Prosperity of the Indo-Pacific Region and the World'.

After the talks, Modi also announced that "Recognising our special relationship, India will extend 'visa on arrival' to all Japanese citizens from 1st March 2016."

On his part, Abe said, "We have taken relationship to new level and buds have turned into blossoms".

Modi said India and Japan will work together at the East Asia Summit to promote an inclusive, balanced and open regional architecture and maritime security in the region.

“We stand strongly for ensuring freedom of navigation and over-flight, and unimpeded maritime commerce. We believe that disputes must be resolved peacefully and that all countries must abide by international law and norms on maritime issues.”

Thanking Abe for his support for India’s membership of the APEC, Modi said India will also strive for “our rightful place in a reformed UN Security Council”.

Modi, who along with Abe will visit Varanasi later in the day, said culture and people breathe life into a relationship.

“Our remarkable relationship also has a wonderful human touch.

The Kyoto-Varanasi partnership is one of its strong symbols,” he said.

According to the joint statement, the two Prime Ministers underlined the need for closer coordination and effective communication, bilaterally and with partners, to address existing and emerging challenges in spheres of security, stability and sustainable development.

“India and Japan will work to strengthen regional economic and security forums and coordinate their actions to tackle global challenges including the reform of the United Nations, climate change as well as terrorism,” it said.

The two also reaffirmed their intention to work together for the early realisation of UN reforms, particularly the Security Council reform, to better reflect the realities of the international community in the 21st century.

Among the international issues, Modi and Abe discussed North Korea’s contentious nuclear programme and expressed concern over that country’s continued development of its nuclear weapons and ballistic missile programmes, including its uranium enrichment activities.

“They urged North Korea to fully comply with its international obligations, including under relevant United Nations Security Council resolutions and to take actions towards the denuclearising of the Korean Peninsula. They also urged North Korea to address at the earliest the abductions issue,” the statement said.

On the occasion of the 70th year since the atomic bombings of Hiroshima and Nagasaki, they reaffirmed their shared commitment to the total elimination of nuclear weapons.

They called for an immediate commencement and early conclusion of negotiations on a non-discriminatory, multilateral and internationally and effectively verifiable Fissile Material Cut-off Treaty (FMCT) on the basis of Shannon Mandate.

“In this context, Prime Minister Abe stressed the importance of early entry into force of the Comprehensive Nuclear Test Ban Treaty (CTBT) which should lead to nuclear disarmament,” the statement said.

They also supported the strengthening of international cooperation to address the challenges of nuclear proliferation and nuclear terrorism.