India-US alliance to check China will be ‘catastrophic’

NEW DELHI:As Prime Minister Narendra Modi wrapped up a successful US visit, an unhappy China warned about the potential disastrous results of such India-US alliance. 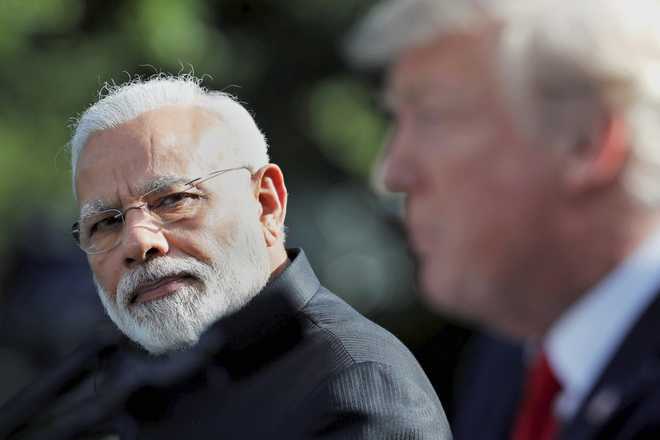 Indian Prime Minister Narendra Modi looks toward President Donald Trump as he speaks in the Rose Garden at the White House in Washington on Monday. AP/PTI photo

As Prime Minister Narendra Modi wrapped up a successful US visit, an unhappy China warned about the potential disastrous results of such India-US alliance. The message was delivered in an article in the state-controlled Global Times (GT) which said Washington and New Delhi seem to be getting closer to one another in their shared “anxieties” about the rise of China.

In another article in GT, China again pointed fingers at India and said New Delhi’s objections have affected the China Pakistan Economic Corridor (CPEC) in the short run but also added if China and Pakistan stay firm in their cooperation, they can dispel India’s doubts and objections. India’s main objection to the CPEC is that it passes through Pakistan-occupied Kashmir (PoK).

The GT article, apparently referring to the bonhomie that was on display when Modi and Trump met and also with reference to the fact that both leaders called for freedom of navigation and resolving of territorial and maritime disputes peacefully in accordance with international law said, “To assume a role as an outpost country in the US’ strategy to contain China is not in line with India’s interests. It could even lead to catastrophic results.”

The second article on CPEC also reaffirmed that despite the recent security concerns, CPEC is going ahead when one considers the fact that the “return rate of the CPEC for China is generally higher than that in other countries.”