JERUSALEM: For the first time, the Israeli military has successfully tested from a ship an advanced surface-to-air missile co-developed with India which will be deployed to secure vital offshore assets like gas fields. 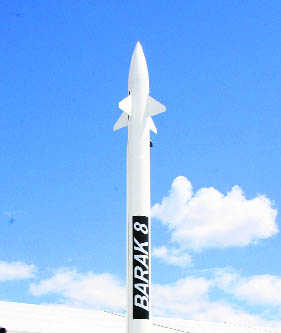 For the first time, the Israeli military has successfully tested from a ship an advanced surface-to-air missile co-developed with India which will be deployed to secure vital offshore assets like gas fields.

The Barak 8 was tested from a ship for the first time and intercepted a small drone simulating an enemy craft. The system extends the range of Israel’s aerial defence and should be operational in about two years.

“The next test on the system is likely to be held in December this year onboard an Indian navy vessel,” they said.

INS Kolkata is the Indian ship likely to be used for testing as the launchers and radars to track missiles are already installed on the vessel.

The missile is being jointly developed by the Defence Research & Development Organisation (DRDO), Israel Aerospace Industries (IAI), Israel’s Administration for the Development of Weapons and Technological Infrastructure, Elta Systems, Rafael and other companies.

Bharat Dynamics Limited (BDL) will be assigned the task of producing the missiles with 32 initial ones to be fitted on INS Kolkata.

It will help defend Israeli navy ships from anti-ship missiles like the Yakhont missile.