BAREILLY: The cleric who was arrested from Bareilly in connection with Hindu leader Kamlesh Tiwari’s murder, has confessed that the accused killers had visited him. 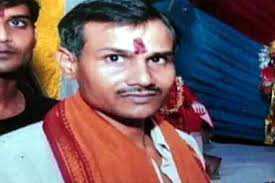 The cleric who was arrested from Bareilly by the Anti-Terror Squad of Uttar Pradesh Police in connection with Hindu leader Kamlesh Tiwari’s murder, has confessed that the accused killers had visited him.

The 25-year-old cleric, Syed Kaifi Ali, is associated with a shrine in Bareilly.

The accused--Moinuddin and Ashfaq--who were arrested in Gujarat on Tuesday night, had visited the shrine on October 18, and informed Ali that they had killed Tiwari in Lucknow earlier in the day.

They sought shelter but Ali refused to provide them any support and asked them to leave. However, he never informed the police about the killers, which is why his role is suspect.

The killers also sought his help in crossing the Uttar Pradesh-Nepal border.

According to a senior police official, “The cleric had also received a call from a suspect in Gujarat on his cell phone. He has confessed to having provided a route map of the porous Indo-Nepal border to the suspected killers.”

The killers of Tiwari first came to Bareilly from Lucknow on Friday and then they left for Palia town of Lakhimpur Kheri district the same night to cross the Indo-Nepal border. However, they failed to cross the border due to tight security so they hired a cab and travelled to Shahjahanpur.

Tahir Ahmed, the cab driver who brought the murder suspects from Palia to Shahjahanpur railway station, confirmed to police that both the men brought by him were the ones spotted entering Tiwari’s house before his murder as seen in the CCTV footage. The car has also been impounded. IANS