NEW DELHI:Friday’s Mirage-2000 crash that left its two pilots dead has raised a question mark over future upgrades of the fighter jet being carried out by public sector giant Hindustan Aeronautics Limited. 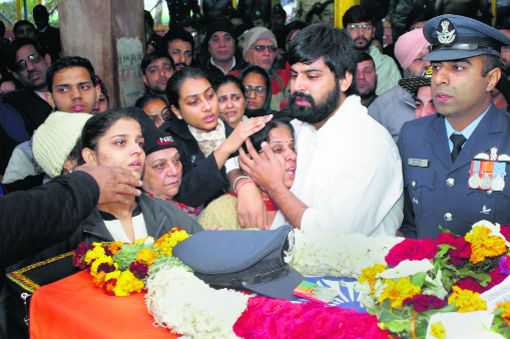 Squadron leader Samir Abrol’s family members and friends at his funeral in Ghaziabad on Sunday. PTI

Friday’s Mirage-2000 crash that left its two pilots dead has raised a question mark over future upgrades of the fighter jet being carried out by public sector giant Hindustan Aeronautics Limited.

In all, Hindustan Aeronautics Limited (HAL) is slated to upgrade 110 Mirage and Jaguar jets. The killed pilots, Squadron leaders Samir Abrol and Sidhharth Negi, were attached to Aircraft and Systems Testing Establishment (ASTE). The two were on a test flight before the plane could be re-allocated to its squadron in the Air Force.

The IAF and the Ministry of Defence are expected to review the progress of the upgrades shortly and new parameters are likely to be introduced on speeding up the programme, running years behind schedule, and also maintaining the quality. A court of inquiry has been launched. Of the 51 Mirage-2000 planes, only 11 have been upgraded so far. Dassault Aviation, the original manufacturer, upgraded four jets—two at its own plant in France and the rest at the HAL headquarters.

The contract with the HAL is to upgrade 47 Mirage-2000s. As of now, the programme is two years behinds schedule. The entire lot was to be upgraded by July 2021 and the deadline was rescheduled to December 2022. So far, the HAL has delivered 9 planes, including the two done by Dassault here. The crashed plane was the 10th upgraded by HAL and the 12th overall if the two done in France are counted. Going by the contract, by now 25 of the planes should have been upgraded and handed over to the IAF.

The upgrade includes new Thales radar, allowing long-range engagement of targets in the air, automatic tracking of targets and mapping of targets on the ground. The pilots now have a display inside their helmets. A clutch of new weapons and beyond visual-range missiles is being added and kits for all the add-ons have been supplied.

In case of Jaguar, a total of 61 are to be upgraded to what in military terminology is called ‘Darin 3’ standard. The contract was signed in 2009 but was largely in cold storage over the choice of its engine. The first plane in its final operational clearance (FOC) version should have been handed over in February this year and has not been handed over. The present pace would mean the upgrade of 61 jets would not be completed by 2024, the scheduled target.

Jaguars are currently powered by Rolls-Royce Adour 811 engines, which are to be replaced with Honeywell’s F-125N. The new engines are supposed to provide almost 1.5 times the power of the existing ones.

Speaking at a seminar in New Delhi last week, Air Chief Marshal BS Dhanoa noted that a crucial contribution to all the successes of indigenisation was also the “supreme sacrifice of IAF’s pilots in testing these aircraft to battle-worthy standards.” He said the IAF had lost 17 pilots and engineers in air accidents during the testing and evaluation of indigenous-prototyped aircraft.