CHANDIGARH: In a rlief to disabled soldiers battling pensionary dues, the Ministry of Defence (MoD) has finally issued instructions to withdraw appeals filed by it in the Supreme Court over the last few years against disability benefits granted to soldiers by various courts and tribunals.

In a rlief to disabled soldiers battling pensionary dues, the Ministry of Defence (MoD) has finally issued instructions to withdraw appeals filed by it in the Supreme Court over the last few years against disability benefits granted to soldiers by various courts and tribunals.

The apex court as well as High Courts, had in various orders and observations, frowned upon the practice of MoD going in for appeal against every verdict passed against it by the court, even in settled matters. The instructions have been issued not only to withdraw pending appeals filed by the MoD, but also to concede such “covered cases” of disability pension filed by aggrieved litigants in the SC on a case-to-case basis.

A committee of experts constituted earlier by the then Defence Minister to recommend measures for reducing and streamlining the system of redressal of grievances had, in its report, come down heavily upon the MoD stating that litigation was being undertaken “compulsively, unethically and by way of administrative egotism”.

The committee had asked the MoD to withdraw and concede all appeals on issues already settled by High Courts and the SC. It had also expressed concern over the MoD challenging disability pensions, observing that stress and strain of military service was universally recognised in affecting and aggravating disabilities in soldiers. The committee had noted that lower-level officials were resisting directions of the political executive and of courts, which was not a healthy sign.

Sources say while many recommendations were accepted in 2016, there was still resistance in issuing implementation letters by the ministry and it was only when present Defence Minister Nirmala Sitharaman took a strict view of the malaise recently that the files were immediately moved.

Sources said many cases, besides disability pension, are also covered for withdrawal as per the recommendations of the committee and the same would be implemented in batches along with other accepted recommendations. 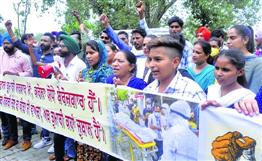