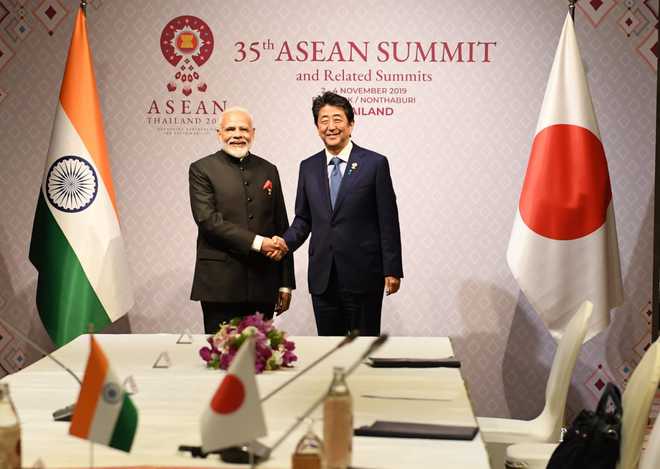 The two leaders held a meeting on the sidelines of the East Asia Summit. Image: Twitter/PIB India

Prime Minister Narendra Modi and his Japanese counterpart Shinzo Abe on Monday reviewed the evolving security scenario in the Indo-Pacific and agreed to further bolster bilateral cooperation in third countries for peace, prosperity and development in the region.

The two leaders held a meeting on the sidelines of the East Asia Summit here during which China’s fast-expanding military and economic expansionism in the Indo-Pacific region figured prominently among several other key issues, officials said.

Without giving specific details of the talks, the External Affairs Ministry said the two prime ministers reaffirmed their commitment towards a free, open and inclusive Indo-Pacific region based on a rules-based order.

“They agreed to further strengthen the bilateral cooperation, including in third countries, for achieving the shared objective of peace, prosperity and progress of the Indo-Pacific region,” it said in a statement.

The resolve by Modi and Abe to work towards a stable Indo-Pacific came in the midst of rising disquiet among several member countries of the 10-nation ASEAN over China’s increasing assertiveness in maritime limits in the region.

The ministry said the two leaders also deliberated on inaugural ‘two-plus-two’ Indo-Japan foreign and defence ministerial dialogue later this month in India, noting that it would help provide impetus to the security and defence cooperation between the two sides.

Modi said he eagerly looked forward to welcoming the Japanese Prime Mminister in India next month for the annual India-Japan summit.

In a tweet, External Affairs Ministry Spokesperson Raveesh Kumar said Modi and Abe prepared the ground for India-Japan two-plus-two dialogue and the annual summit in their “good discussion”.

Modi said he was convinced of the success of the forthcoming annual summit in further deepening the India-Japan special strategic and global partnership, according to the MEA.

It was the third meeting between Modi and Abe in the past four months. Their previous meeting was in Vladivostok in Russia in September. PTI