Modi should be installed as PM to give befitting reply to terrorism, Pak: Shah

BENGALURU: BJP president Amit Shah on Saturday said Narendra Modi should be installed as Prime Minister once again to secure the country and to give a “befitting” reply to terrorism and Pakistan. 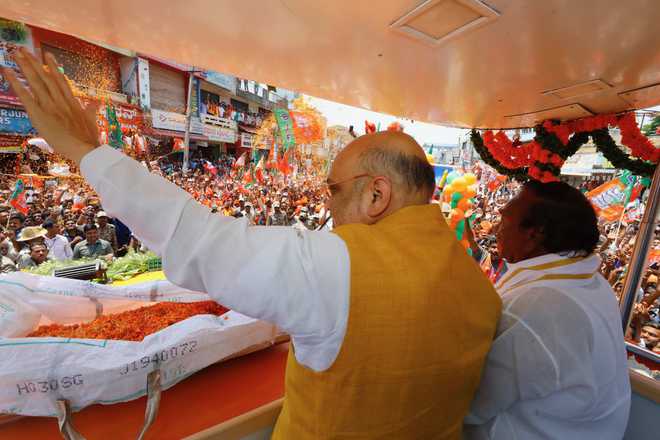 BJP president Amit Shah on Saturday said Narendra Modi should be installed as Prime Minister once again to secure the country and to give a “befitting” reply to terrorism and Pakistan.

Raghavendra is pitted against former legislator Madhu Bangarappa of the JD(S), who is the son of former chief minister S Bangarappa.

“This election is not only about making Raghavendra MP, but to make Narendra Modi the Prime Minister,” Shah said at the end of the roadshow.

Noting that he too was facing election from Gandhinagar Lok Sabha seat in Gujarat on April 23, Shah said he had come to campaign for Raghavendra to ensure his victory.

Hundreds of enthusiastic BJP workers cheered the BJP chief chanting “Modi, Modi” as the “rath”, a modified vehicle, covered a little more than one-and-a-half kilometre distance with Raghavendra, among others, accompanying him.

Thousands of people had gathered all along the route showering flower petals on Shah as the vehicle wound its way in a delirious atmosphere.

The roadshow that began with party workers greeting Shah with a loud cheer in favour of the BJP, lasted about 40 minutes.

Ahead of the “rath”, BJP supporters sporting saffron caps and holding cutouts, placards and party flags danced to the drumbeats, as slogans of ‘Modi, Modi’ rent the air.

Raghavendra, who is a sitting MP from Shimogga had defeated Madhu Bangarappa, joint candidate of ruling Congress-JD(S) coalition in the bypolls held in November last year.

While Raghavendra is banking on the Modi wave along with his father’s name and his work as MP, Madhu too is relying on his late father’s legacy, support of the ruling Congress-JD(S) coalition, and on Ediga community, to which he belongs.

Out of eight assembly segments in Shimogga, the BJP had won seven and the Congress only one in Bhadravathi during the 2018 assembly polls.

Madhu had lost to his own brother Kumar Bangarappa of the BJP during the 2018 assembly polls from Soraba constituency.

Raghavendra’s father and Leader of Opposition in the assembly, Yeddyurappa is the BJP legislator from Shikaripura constituency.

There are 12 candidates in the fray in Shimogga that would go to polls on April 23. PTI