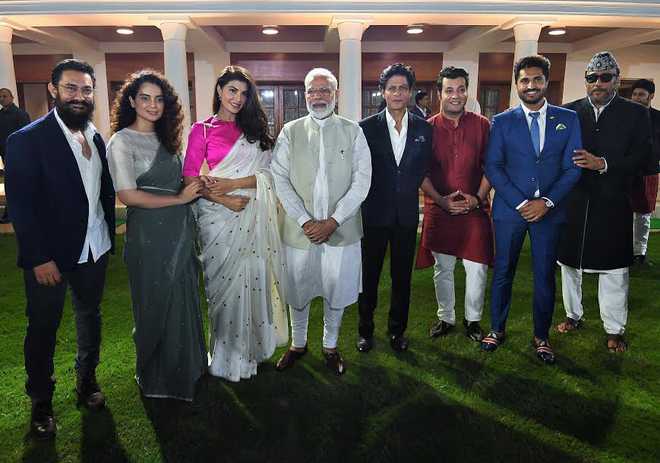 Prime Minister Narendra Modi on Saturday met Bollywood actors and filmmakers, including Shah Rukh Khan and Aamir Khan, to discuss initiatives to mark the 150th birth anniversary of Mahatma Gandhi and said plans are afoot to host an international entertainment summit in India.

In an interaction with them at his official residence here, the prime minister said as India celebrates its 75th Independence Day in 2022, the entertainment industry should showcase the inspiring stories of the country’s freedom struggle from 1857 to 1947 and the nation’s growth story from 1947 to 2022, a statement from his office said.

Referring to Gandhi, he said the power of creativity is immense and it is essential to harness this spirit of creativity for the nation. “Several people from the world of films and television have been doing great work when it comes to popularising the ideals of Mahatma,” he said. He also released four videos on the theme ‘Gandhi at 150’.

Recalling his interaction with the Chinese President at Mamallapuram recently, he said Xi Jinping had highlighted the popularity of Indian films such as ‘Dangal’ in China.

He also mentioned about the popularity of Ramayana in South East Asia.

He exhorted the film fraternity to utilise their soft power potential to promote tourism in India.

The prime minister told the gathering that they do great work but perhaps they were not aware of its global influence.

“Your work has reached all corners of the world. On the part of the government, I am happy to help in any way I can to ensure maximum impact of your creative initiatives,” Modi told the film personalities.

He also appealed to those present to visit the Dandi museum as also the ‘Statue of Unity’ in Gujarat.

The prime minister said after his informal summit with the Chinese President in Mamallapuram, tourist arrival has seen a jump.

Speaking on the occasion, actor Amir Khan said “as creative people, there is much we can do”.

“And, I assure the PM that we will do even more,” he said, according to the Prime Minister’s Office.

Shah Rukh Khan said he feels that there is a need to reintroduce Gandhi to India and the world.

“We are accustomed to being known as representatives from the world of entertainment. But, you have also added a spirit of responsibility to this by involving us in popularising the ideals of Gandhi ji,” said director Anand L Rai.

Our film and entertainment industry is diverse and vibrant.

Its impact internationally is also immense.

Our films, music and dance have become very good ways of connecting people as well as societies.

Here are more pictures from the interaction today. pic.twitter.com/711sKni29l

Spreading the thoughts of Mahatma Gandhi through cinema, ensuring more youngsters are well-acquainted with the ideals of Gandhi Ji.

We exchanged thoughts on a wide range of subjects. pic.twitter.com/2xKTEZrVAJ