CHANDIGARH: The worst fears about the northern region of the country losing its groundwater have been confirmed. The National Aeronautics and Space Administration’s (NASA) satellite imagery made available to the Centre warns of fast disappearing of subsoil water in these states. 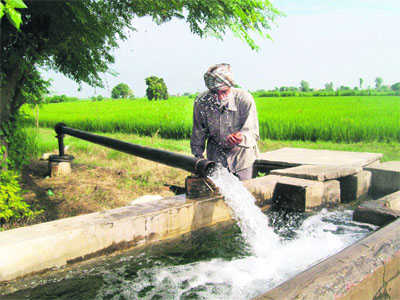 The worst fears about the northern region of the country losing its groundwater have been confirmed. The National Aeronautics and Space Administration’s (NASA) satellite imagery made available to the Centre warns of fast disappearing of subsoil water in these states.

The NASA report forwarded to the Punjab Government by the Union Ministry of Agriculture says that “beneath north India’s irrigated fields, the groundwater has been disappearing”. “It is being pumped out and consumed for human activities, principally to irrigate cropland, faster than the aquifers can be replenished by natural processes such as rainwater,” the report says.

“If measures are not taken to ensure sustainable groundwater usage, the consequences for a large segment of population of the region may include a collapse of agriculture output and severe shortage of potable water,” the report warns.

It further says that the north Indian states of Punjab, Haryana and Rajasthan have all ingredients for groundwater depletion — staggering population growth, rapid economic development and water-hungry farms, which account for 95 per cent ground water use in the region.

The twin satellites of NASA’s Gravity Recovery and Climate Experiment (GRACE) can sense minute changes in the earth’s gravity field and associated mass distribution, including water masses stored above or below the earth’s surface. As the satellites orbit 300 miles above the earth’s surface, their positions change in response to the variations in the gravity pull.

Fall in the water table was recorded 3.80 mts in Khadur Sahib and Mahilpur blocks of the state in 2014-15 and it was 4 mts in Jalandhar west region of Doaba belt. Of the total 138 blocks put under observation for water assessment, 105 are over exploited in the state. Only 26 blocks are in the safe category. In half of Punjab, the water level from the surface level has gone down from 15 mts to 30 mts.

However, equally critical development is decline in the flow of water in Ravi and Beas rivers. It has come down to 13.38 MAF as per the latest flow series of 1981-2013. The decline in the flow will lessen the percolation of surface water in the subsoil, thus further harming the water table. It will also adversely affect the irrigation of the land via canal system. There has been persisting dispute among Punjab, Haryana and Rajasthan over the allocation of river waters.

As Punjab has been growing water-guzzling crops such as paddy, experts have been urging the government to move away from paddy-wheat rotation and opt for less water-consuming crops.

The UN Conference on Trade and Development Investment Trends...