There are heroes and there are heroes. So goes the popular perception of bravehearts. In the military sense, heroism is often an event, an episode or a happening quite often unplanned but sometimes planned as well. 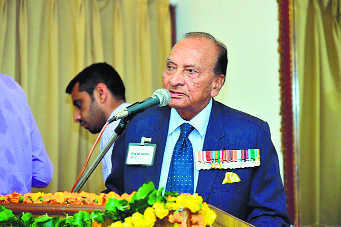 There are heroes and there are heroes. So goes the popular perception of bravehearts. In the military sense, heroism is often an event, an episode or a happening quite often unplanned but sometimes planned as well. This is when there is an opportunity; a chance to do something unexpected; something out-of-the-box; something extraordinary either individually or in a buddy pair, sub-team or team action. The soldier gets involved in a manner led by gut instinct, grit, enterprise, cold courage tested almost always against impossible odds. Such a braveheart is led by selflessness and unit/country-first ideals… always and every time.

So, there are heroes and there are heroes. By implication, this means that some heroes rise above heroism itself. When they do, they need to be respected, admired; placed on an altar where only the finest examples of humanity belong: deathless heroes. I was proud to come across one such person: Brig NS Sandhu, MVC.

Then Lt Col NS Sandhu was in command of 10 Dogra in the climacteric Battle of Dera Baba Nanak (DBN) during the 1971 Indo-Pak war. This 3 Cavalry veteran of the Battle of Khemkaran (1965 Indo-Pak war) had, as a Major, delivered a gritty performance during that battle (his ‘C’ squadron destroyed 14 Patton tanks) which saved Punjab for India. As CO of 10 Dogra, he handled the enormously complex challenge of capturing the strategically important DBN Bridge as only a high-grade war veteran could — with admirable presence of mind, courage, coolness and situational awareness.

Everything that could go wrong went wrong but Lt Col Sandhu was that kind of person who brought order to a convoluted battlefield situation rapidly spiraling out of control. He did this on a pitch-dark night amidst elephant grass (sarkanda)-driven disorientation of vital battlefield force-multipliers; accurate enemy ground fire and artillery fire. He did the right thing — he took charge leading from the front. He handled the amorphous battlefield situation with the instinct of a seasoned veteran instead of ‘taking counsel of his fears’; an escapism which the iconic British-Indian General, Bill Slim, had learnt to avoid while assiduously converting ‘defeat into victory’ in Burma during World War II.

Narinder Sandhu too achieved spectacular success despite casualties to his officers/men and he himself getting wounded. It came as no surprise when the DBN Bridge was captured by 10 Dogra on the misty morning of December 6, 1971. Equally unsurprising was the award of Maha Vir Chakra to Lt Col Sandhu for his exceptional leadership.

This was a straight-legged narration of the officer’s heroic acts in two successive wars, but we were talking about a bit more; about deathless heroism, remember?

November 22, 2016 was a day which the young Research Team members of the Directorate of Defence Services Welfare, Punjab, are unlikely to forget in a hurry. On this day, Brig NS Sandhu was host to the Research Team at his gracious, well-appointed home in Chandigarh. The association of young researchers with this real life hero goes back to the time in early 2015 when the Punjab State War Heroes Memorial and Museum research work began with initially raw research rookies on board. He was one eagerly awaited veteran who always met them with a smile, encouraged them with kind, motivational words, leaving them spell-bound.

The meeting on November 22 was therefore planned as a brief ‘get well sir’ visit to check on their mentor’s health which, they were aware, had been under severe stress and scrutiny.

Dressed in a French grey jacket-and-black-trouser combination with a peach pocket square and attitude to match, Brig Sandhu was waiting on his lawn with a smile that matched his jaunty pocket square. Expecting to find him bed-ridden and surrounded by tubes and catheters, the Research Team was far too shocked to ask about his well-being because the inquiry seemed so irrelevant. It was only later that the young researchers learnt, albeit reluctantly, from their deathless hero how he had combated grave health-related adversity without losing his infectious smile, composure or equanimity.

There are real life heroes after all… and a few of them are deathless.