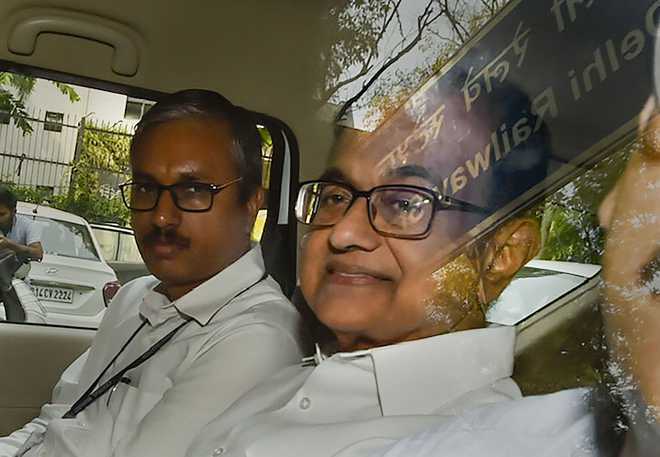 A three-judge Bench headed by Justice R Banumathi directed him to furnish a personal bond of Rs 1 lakh and two sureties in the like amount and asked him to be available for questioning. He cannot leave the country without the court’s permission, the court said.

This however will bring no immediate relief to Chidambaram, who is currently in Enforcement Directorate’s custody in a money laundering case relating to the scam.

“The appellant (Chidambaram) is not a ‘flight risk’ and in view of the conditions imposed, there is no possibility of his abscondence (sic) from the trial,” the Bench said, allowing his petition challenging the September 30 order of the Delhi High Court which had rejected his bail plea.

The top court clarified that the findings of the Delhi High Court will not have any bearing on the proceedings in the case.

The grant of bail plea comes four days after the CBI filed a charge sheet before a Delhi court accusing him, his son Karti and others of causing loss to the exchequer by their alleged acts of corruption.

Chidambaram, 74, was arrested by the CBI on August 21 in the INX Media corruption case and is currently under the ED’s custody in a related money laundering case. The CBI had registered an FIR on May 15, 2017, alleging irregularities in a Foreign Investment Promotion Board clearance given to the INX Media group for receiving overseas funds of Rs 305 crore in 2007, during Chidambaram’s tenure as the finance minister. Later, ED lodged a separate money-laundering case in 2017.

The Bench didn’t agree with the CBI’s submissions with regard to accused in economic offences fleeing India, saying: “At this stage itself, it is necessary for us to indicate that we are unable to accept the contention of the Solicitor General that ‘flight risk’ of economic offenders should be looked at as a national phenomenon and be dealt with in that manner merely because certain other offenders have flown out of the country”.

“The same cannot, in our view, be put in a straight-jacket formula so as to deny bail to the one who is before the court, due to the conduct of other offenders, if the person under consideration is otherwise entitled to bail on the merits of his own case,” said the Bench, which also included Justice AS Bopanna and Justice Hrishikesh Roy.