BHOPAL:The Congress today raised an alarm over the late arrival of EVMs and Voter Verified Paper Audit Trail (VVPAT) machines by more than 48 hours at the district headquarters of Sagar and Khargone in Madhya Pradesh, as well as an hour-long power outage in the capital’s old jail area. 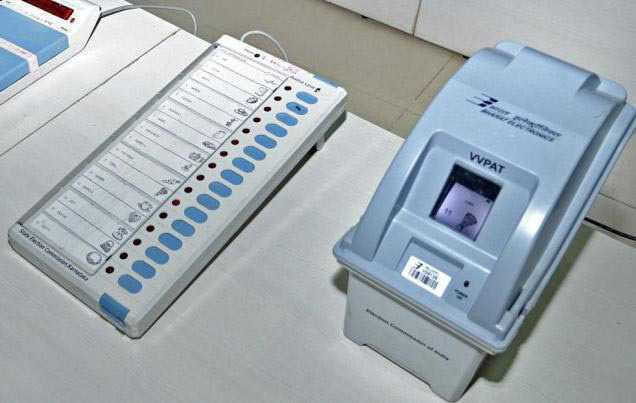 The party has also lodged a complaint with the Chief Electoral Officer in Raipur regarding this. File photo

The Congress today raised an alarm over the late arrival of EVMs and Voter Verified Paper Audit Trail (VVPAT) machines by more than 48 hours at the district headquarters of Sagar and Khargone in Madhya Pradesh, as well as an hour-long power outage in the capital’s old jail area.

While state Home Minister Bhupendra Singh is contesting  the Khurai seat, minister Balkrishna Patidar is fighting from Khargone. In all, 118 EVMs from Khurai in Sagar district and 50 in Khargone arrived 48 hours after the Wednesday polling for all 230 Assembly constituencies.

“We will probe the matter,” Khargone district deputy election officer MN Klen said. State Chief Electoral Officer VL Kantha Rao claimed these EVMs were “unused or kept in reserve”. To this, Congress MP Vivek Tankha remarked: “These spare EVMs were to be deposited two hours after the polls and not two days.”

Voting machines from about 2,250 polling booths in Bhopal district have been kept in the old jail located in Arera Hills. “The CCTV camera and LED panel were down for more than an hour and no one knows what transpired or who went inside the strongroom during that period,” pointed out Congress candidate from Narela Dr Mahendra Singh Chouhan.

Alleging tampering, Congress leaders and supporters arrived on the jail premises, staged a demonstration and raised slogans against the district authorities.

A Congress delegation registered a complaint. “I urge all candidates and workers to keep a close vigil on the strongrooms where the EVMs are kept till December 11,  the day counting will take place,” state Congress chief Kamal Nath tweeted.

New Delhi: A Congress delegation met the EC and raised concern over the  security of EVMs inside strongrooms and their handling during the counting process in MP and Chhattisgarh and the alleged deletion of voters in UP. Congress’ PL Punia claimed “suspicious people” with laptops and cellphones were seen near the strongroom where EVMs were kept after voting on the “pretext of repairing CCTVs”. — PTI