NEW DELHI: Facing flak after he cited the Rs 120 crore business done by three movies on a single day to rebut suggestions of an economic slump in the country, Union minister Ravi Shankar Prasad on Sunday withdrew his comments. 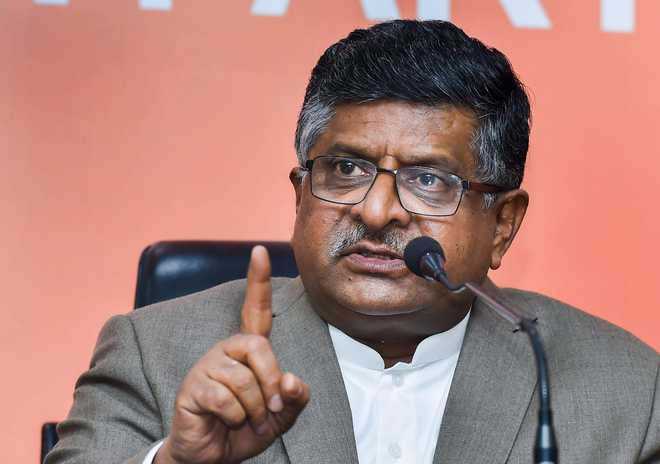 Facing flak after he cited the Rs 120 crore business done by three movies on a single day to rebut suggestions of an economic slump in the country, Union minister Ravi Shankar Prasad on Sunday withdrew his comments.

Prasad’s comments in Mumbai on Saturday coupled with his criticism of an NSSO report on high unemployment rate and IMF’s report of a slowdown in India had attracted flak and the senior BJP leader was also trolled online.

In a statement issued on Sunday, Prasad claimed that one part of his statement had been “completely twisted out of context”, and said “being a sensitive person, I withdraw this comment”.

“My comments made yesterday in Mumbai about three films making Rs 120 crore in a single day- the highest ever, was a factually correct statement. I had stated this as I was in Mumbai- the film capital of India. We are very proud of our film industry which provided employment to lakhs of people and contributes significantly by way of taxes.

“I had also explained in detail about the various measures the government has taken as pro-people move to strengthen our economy. Government of PM Narendra Modi always cares for the sensitivity of common people. Entire video of my media interaction is available on my social media. Yet I regret to note that one part of my statement has been completely twisted out of context. Being a sensitive person, I withdraw this comment,” Prasad said.

Prasad on Saturday said three Bollywood movies generating business of Rs 120 crore on the October 2 holiday suggested a “sound economy” even as he dubbed “wrong” the NSSO report which had reportedly pegged unemployment rate at 45-year high in 2017.

Days after the International Monetary Fund (IMF) said the economic slowdown is more pronounced this year in India and Brazil, Prasad said the measurement was incomplete.

He alleged that some people were misleading people over the unemployment scenario.

“I was also told that on October 2, which is observed as one of the national holidays, three Hindi movies garnered Rs 120 crore business. Unless the economy is sound in the country how can three movies alone collect so much business in a single day?” Prasad asked, while speaking to reporters. —PTI