AHMEDABAD: Taking a serious note of the proliferation of illegal structures housing hotels and guest houses in and around the eco-fragile Gir Lion sanctuary, the Gujarat High Court has directed the state government to clear all such constructions immediately and report back by March 5. 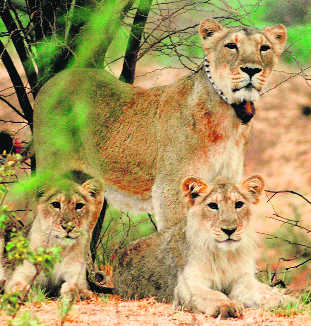 Taking a serious note of the proliferation of illegal structures housing hotels and guest houses in and around the eco-fragile Gir Lion sanctuary, the Gujarat High Court has directed the state government to clear all such constructions immediately and report back by March 5.

The high court order in effect will also mean a second look at the state government’s plan to develop a tourism zone touching the buffer zone of the protected forest areas falling in Amreli district in the Saurashtra region of the state. A Division Bench of the high court comprising Justices Jayant Patel and SH Vora told the government to give three days time to the owners of the private illegal structures to submit the mandatory permission papers before passing prohibitory orders discontinuing their use.

It all began with an anonymous letter to the high court informing it about the existence of illegal hotels and guest houses in and around the Gir sanctuary, the only abode of the Asiatic Lions, as well as the state government’s plan to develop a tourism zone.

The letter also expressed the apprehension that the proliferation of the illegal structures and further creation of the tourism zone could enhance the fragility of the lion corridor.

The high court accepted the letter as a suo moto public interest litigation and had directed the government to undertake a survey and report about the existence of illegal structures, if any.

The state government submitted its report to the high court yesterday accepting that 128 illegal establishments including hotels and guest houses were operating within the 2-km buffer zone around the sanctuary falling in Amreli, Junagadh and Gir-Somnath districts in the Saurashtra region of the state. The high court in its order said an officer not below the rank of deputy collector “shall inquire whether permission is granted for running hotel, farm houses and other hospitality units. If the units fail to furnish the permission within three days, prohibitory order shall be passed for discontinuing their use.” Such hotels have, however, been allowed to move out their belongings and could also challenge the high court’s order. The next hearing in the case has been fixed for March 5.

Meanwhile, the latest census report indicated an increase in the population of wild asses in the 4,953 sq km wild ass sanctuary in the Little Rann of Kutch in Gujarat by about 10 per cent from 4,038 in 2009 to 4,451 now.