Roorkee school set to get quake-proof shield : The Tribune India

VANCOUVER:A school in Roorkee will soon be the staging area for a pioneering research in the field of structural engineering, allowing its building to withstand some of the biggest earthquakes ever recorded. 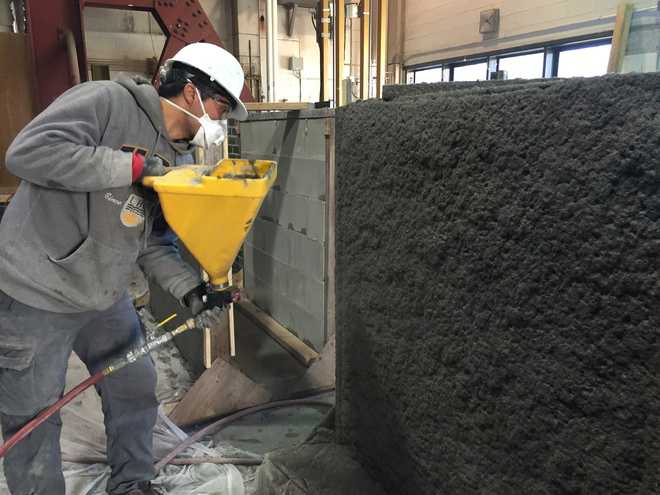 A wall being plastered with seismic-resistant concrete at the University of British Columbia, Vancouver. Courtesy: UBC Public Affairs

A school in Roorkee will soon be the staging area for a pioneering research in the field of structural engineering, allowing its building to withstand some of the biggest earthquakes ever recorded.

Researchers at the University of British Columbia (UBC) have developed a “super concrete” that on application to the surface of the wall makes the structure earthquake-proof. A thin coating of the concrete is enough to amplify the strength of vulnerable structures.

The eco-friendly ductile cementitious composite (EDCC) material is strong and malleable, similar to steel, allowing the walls to bend during earthquakes, thereby preventing them from crumbling.

A joint Indo-Canadian effort, it took six years for PhD scholar in UBC’s Department of Civil Engineering Salman Soleimani-Dashtaki and his team to come up with the EDCC, in close coordination with the India-Canada Centre for Innovative Multidisciplinary Partnerships to Accelerate Community Transformation and Sustainability (IC-IMPACTS). The centre promotes research collaboration between the two countries.

IC-IMPACTS, that funded the research, will shortly retrofit the schoolbuilding in quake-prone Uttarakhand using the EDCC. The hill-state sits in “Zone V” — the most seismically active area in the country — placed alongside the North-East, parts of Jammu and Kashmir and Himachal Pradesh, the Rann of Kutch in Gujarat, parts of north Bihar and the Andaman and Nicobar Islands.

The EDCC is a mix of cement with polymer-based fibres, fly ash and other industrial additives, making it highly sustainable and eco-friendly. “By replacing nearly 70 per cent of cement with fly ash, an industrial byproduct, we can reduce the cost and also contribute to the carbon sink,” says Dr Nemkumar Banthia, IC-IMPACTS Scientific Director and Professor at UBC’s Civil Engineering Department, who supervised the work.

The EDCC was subjected to rigorous testing by simulating earthquakes similar to the 9.1 magnitude temblor that struck Tohoku, Japan, in 2011. “We sprayed walls with a 10 mm-thick layer of EDCC, sufficient to reinforce most interior walls against seismic shocks, and subjected them to Tohoku-level quakes, but couldn’t break them,” says Salman Soleimani. Reinforced walls can withstand temblors up to 200 per cent stronger than the actual intensity of the 2011 quake, he adds.

The material is applied to one side of the wall or both, depending on the structural integrity of the building, using a spray machine. The application process takes just a few days.

Dr Annie B Jamieson Elementary School in Vancouver will be the first to be retrofitted with the material later this month. Dr Banthia and Soleimani, who will visit India in December, are likely to finalise and oversee the retrofit at Roorkee.

IC-IMPACTS spearheads collaborative research in the fields of infrastructure, water and public health and is funded equally by the Indian and Canadian governments. Researchers and students from both countries work in close coordination to help transform the lives of people of both communities through innovation, says Dr Banthia.

In 2015, IC-IMPACTS laid a “self-healing road” — one of the most advanced in the world — in a rural area outside Bangalore, Karnataka. The road, designed to resist heavy rain and intense heat, has weathered all four seasons and is a boon for the local community, says Dr Banthia. The organisation is currerntly working on technology to clean the Ganga in coordination with the Indian Government.

We sprayed walls with a 10 mm-thick layer of EDCC and subjected them to Tohoku-level quakes, but couldn’t break them. —Salman Soleimani, PHD Scholar

By replacing nearly 70 per cent of cement with fly ash (a constituent of EDCC), an industrial byproduct, we can reduce the cost and also contribute to the carbon sink.  —Dr Nemkumar Banthia, IC-Impacts Scientific Director