AHMEDABAD: About 100 kg of heroin valued at over Rs 500 crore was seized and nine Iranian nationals arrested from a boat off the Porbandar coast today in a joint operation by the Coast Guard and the Gujarat anti-terrorist squad. 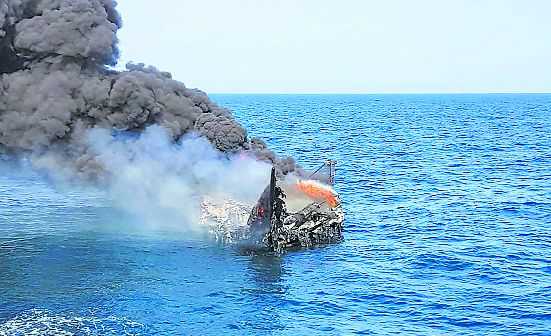 Smoke rises from the vessel that was carrying drugs from Pakistan, in Porbandar. PTI

About 100 kg of heroin valued at over Rs 500 crore was seized and nine Iranian nationals arrested from a boat off the Porbandar coast today in a joint operation by the Coast Guard and the Gujarat anti-terrorist squad.

An official spokesman here said the Gujarat ATS had received a tip-off about the Iranian boat carrying drugs, which would try to off-load the consignment somewhere on the Saurashtra coast near Porbandar.

The ATS and the Coast Guard launched a joint operation to trace the boat and located it after about 24 hours of search in the high seas. But as the Indian security forces intercepted the boat and were approaching it, its occupants set it afire in a bid to destroy the drugs. The security forces, however, managed to recover about 100 kg of heroin and nabbed the boat occupants too. The boat was completely burnt and sank in the high seas.

Sources said on interrogation, the crew members admitted that the ship had sailed from Iran but had picked up the consignment of drugs from Gwadar port in Pakistan. The consignment was owned by a Pakistani drug mafia Hamid Malek. The sources, however, did not reveal the name of the recipient who was supposed to take over the consignment for distribution in India.

City residents can get tested for Covid-19 at private labs without doctor's prescription: UT Adviser Parida