NEW DELHI: Escalating pressure on the government on the Ram temple issue, RSS on Sunday mobilised support of Muslim community for its expeditious construction, either through adjudication by the court or through an ordinance. 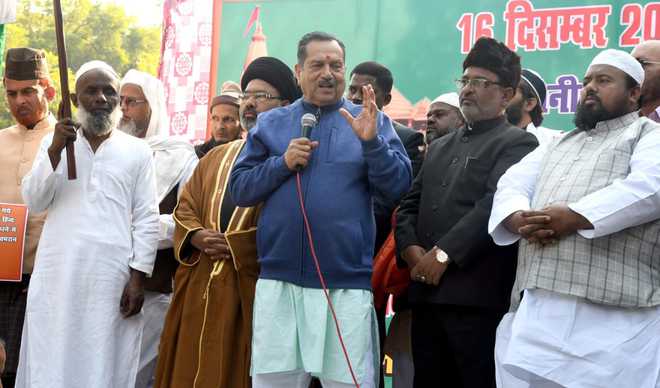 Escalating pressure on the government on the Ram temple issue, RSS on Sunday mobilised support of Muslim community for its expeditious construction, either through adjudication by the court or through an ordinance.

RSS-backed Muslim Rashtriya Manch at its national convention announced a movement from today favouring construction of the temple. RSS' ideologue and its key national functionary Indresh Kumar, who is manch's patron, presided over the convention.

The participants -- on the podium and in the audience -- held hands to express solidarity to the cause of temple construction. The convention resolved to take the message of temple to all villages of the country. A march was alson taken out.

The development is potentially explosive which would add to the worries of the government which is facing the heat from the Opposition parties on array of issues.

After the convention, memorandum was sent to authorities, including the President, Prime Minister and Chief Justice of India, pressing for an early denouement to the temple issue.

Addressing the gathering, Indresh Kumar cautioned the ruling BJP of backlash from people and dismal electoral fate as its faced in the just-concluded elections in the Hindi heartland states of Madhya Pradesh, Rajasthan and Chhattisgarh.

"All political parties must realise the sense of frustration among people, including Muslim community, on the delay in construction of the temple. They should not be under any illusion to attribute the electoral results to NOTA," Indresh Kumar cryptically said, adding there will be a redux of the voting pattern in the future elections.

His message was apparently directed to all political parties, but more to the BJP which was dethroned in the three states.

While appealing to all political parties to cooperate in construction of the temple, he said the Congress and the Communist parties protracted the case in the court through a stratagem of subterfuge logic and misleading facts.

"It is time that the government provided justice to 125 crore people of the country," he said and added that the highest court of the country deviated from its assurance it gave three years back that the issue will be adjudicated upon after holding day-to-day hearing.

Mohammad Iliyas, a lawyer from Himachal Pradesh, said the demand for the temple symbolising supreme faith of the Hindu community was justified. Political parties should shun politics on the matter, he added.