KOLKATA: Sister Nirmala of the Missionaries of Charity, founded by the noble laureate Mother Teresa, passed away last night during sleep at St John Church at Sealdah. 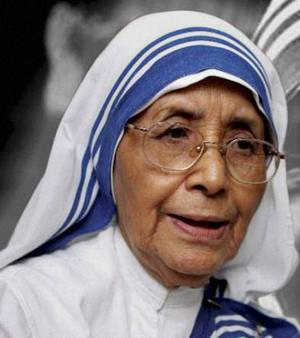 Sister Nirmala of the Missionaries of Charity, founded by the noble laureate Mother Teresa, passed away last night during sleep at St John Church at Sealdah. She was 81.

Sister Nirmala's body would be brought to Mother House tomorrow morning to enable her disciples and the people of other religious communities to pay their last respects to her. She will be buried in the evening near St John Church.

She was bestowed with the Padma Vibhushan in 2009 for her sacrifice and lifelong service to the cause of the poor and downtrodden. A lifelong associate of Mother Teresa Nirmala Joshi, afterwards named as Sister Nirmala, dedicated her life to the service of the poor and the downtrodden, especially the orphan children who used to be picked up from the streets and then rehabilitated at the Missionaries of Charity at Sealdah and different other homes.

An MA in political science and a trained lawyer, Sister Nirmala started the MoC’s contemplative branch in 1976 and headed it till 1997 when she was elected to succeed Mother Teresa as the order's Superior General.

Sister Nirmala was re-elected for a third term on March 13, 2009, but the MoC held a second election days later after she wanted to be relieved of the responsibility owing to ill health.