NEW DELHI: Outgoing President Pranab Mukherjee said on Monday that soul of India resides in pluralism and tolerance and the country must free its public discourse from all forms of violence, physical as well as verbal. 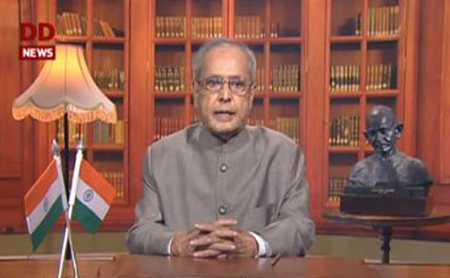 Outgoing President Pranab Mukherjee said on Monday that soul of India resides in pluralism and tolerance and the country must free its public discourse from all forms of violence, physical as well as verbal.

In his farewell address broadcast to the nation, he said creation of an inclusive society has to an article of faith. He called for resurrecting the power of non-violence.

Mukherjee, who had entered parliament first in 1969, said for the past 50 years of his public life, his passion has been the service of people of India.

"I want to share with you some truths that I have internalised in this period.  The soul of India resides in pluralism and tolerance. India is not just a geographical entity. It carries a history of ideas, philosophy, intellect, industrial genius, craft, innovation and experience. Plurality of our society has come about through assimilation of ideas over centuries," the President said.

He said multiplicity in culture, faith and language is what makes India special.

"We derive our strength from tolerance. It has been part of our collective consciousness for centuries. There are divergent strands in public discourse. We may argue, we may agree or we may not agree. But we cannot deny the essential prevalence of multiplicity of opinion. Otherwise, a fundamental character of our thought process will wither away," he said.

Mukherjee, who will demit office on Tuesday, said compassion and empathy was the true foundation of India's civilisation but "every day we see increased violence around us".

"At the heart of this violence is darkness, fear and mistrust. We must free our public discourse from all forms of violence, physical as well as verbal. Only a non-violent society can ensure the participation of all sections of the people, especially the marginalised and the dispossessed in the democratic process.

"Power of non-violence has to be resurrected to build a compassionate and caring society," he said.

Mukherjee said Mahatma Gandhi saw India as an inclusive nation where every section lived in equality and moved forward unitedly in ever-widening thought and action.

"For us, creation of an inclusive society has to be an article of faith," he said.

The President said financial inclusion was at the core of an equitable society and the poor must be empowered to ensure that the fruits of development reach the last person.

Mukherjee said as one advances in age, so does one's propensity to sermonise.

"But I have no sermon to make. For the past fifty years of my public life — my sacred text has been the Constitution of India, my temple has been the Parliament of India and my passion has been the service of the people of India," he said.

The President said on the eve of stepping down from office, he was overwhelmed by a deep sense of gratitude to the people and their representatives for the trust posed in him.

"I have received much more from the country than I have given. For that, I will remain ever indebted to the people of India." Mukherjee said he had gained from his travels across the country and his conversations with a vast cross-section of people including students, scientists, jurists, authors and artists.

He called for collective action to meet environmental challenges and steps to elevate higher institutions of learning to "world-class levels".

"Our education system must accept disruption as a norm and prepare students to manage and build upon disruptions. Creative thinking, innovation and scientific temper have to be promoted in our institutions of higher learning." He said leading healthy, happy and productive life was a basic right of citizens and quest for happiness was closely tied to quest for sustainable development.

"Social inclusion would ensure access to the fruits of progress to all. Good governance would provide the ability to people to shape their own lives through transparent, accountable and participatory political institutions."

He also referred to his efforts to improve Rashtrapati Bhavan estate.

"We tried to build a humane and happy township. We found happiness that is associated with joy and pride, smiling and laughter, good health, feeling of safety and positive actions.

"We learnt to wear a smile always, to laugh at life, to connect with nature and get involved with the community. And then, we extended our experience to a few villages in the neighbourhood. The journey continues."

Mukherjee also referred to his work from Tuesday. "When I speak to you tomorrow, it will not be as the President but as a citizen — a pilgrim like all of you in India's onward march towards glory," he said. — IANS