NEW DELHI: The private company collecting toll tax from trucks entering Delhi from neighbouring states of Haryana, Uttar Pradesh and Rajasthan today told the Supreme Court that it was not in a position to comply with the court order for collection of pollution tax from these commercial vehicles. 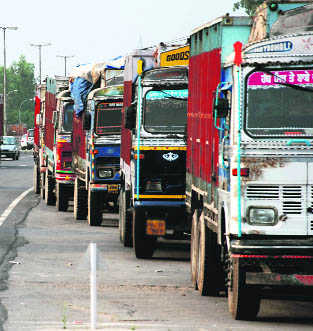 The private company collecting toll tax from trucks entering Delhi from neighbouring states of Haryana, Uttar Pradesh and Rajasthan today told the Supreme Court that it was not in a position to comply with the court order for collection of pollution tax from these commercial vehicles.

The company, SMYRLLP which has been asked by the Delhi Municipal Corporation (MCD) to collect toll tax, in fact questioned the validity of the SC’s order passed on October 9, directing the company to collect additional tax for four months–from November 1, 2015, to February 29, 2016–on experimental basis. The apex court order was part of efforts to bring down Delhi’s air pollution, the worst in the world, mainly due to the toxic fumes emitted by trucks.

Arguing for the company, senior advocate Shyam Divan said his client was already suffering losses as under the three-year contract with the MCD it had to pay the corporation Rs 10.5 crore every week, irrespective of the actual toll collection.

Won on competitive bidding, the contract, however, protected the company against charges of financial fraud as the MCD was not supposed to bother about the actual collections. But the SC had saddled the company with the additional burden of collecting pollution tax, known as the Environmental Compensation Charge (ECC), amounting to Rs 700-1,300 from each truck, depending on its load capacity, free of cost.

The apex court order had exposed the company to charges of swindling, besides constant bickering with the Delhi Government over the actual ECC collected. The SC had asked MCD to install close-circuit televisions (CCTVs) to keep track of the number of commercial vehicles passing through Delhi, while the company was supposed to collect ECC from trucks carrying non-essential items. This was bound to create disputes as the company was not in a position to assess the nature of commodities in each truck and its category to decide if it had to pay Rs 700 or Rs 1,300, Divan said.

“Imposing this huge responsibility without seeking our views is against the basic principles of fairness,” besides the fact that this was not part of its contractual obligations with the MCD, he argued. The SC should have placed the burden on the Delhi Government, not the company, he pleaded.

Divan was arguing before a Bench headed by Chief Justice HL Dattu, which at the outset expressed its reluctance to exempt the company from the obligation.

The company, however, said it was not interested in continuing with its contract with MCD as it did not have the manpower, expertise and infrastructure or the capacity to sustain losses, and the SC could not come in its way.

The company was collecting toll at 124 entry points, some of which did not even have electricity connection, Divan contended. The arguments would continue on November 27.

On October 30, the Bench had issued notice to the Centre and the Delhi Government seeking their detailed response to the company’s contentions, but refused to defer implementation of its order for the collection of the tax—Rs 700 per entry for categories 2 (light vehicles) and 3 (two-axle trucks) and Rs 1,300 for categories 4 (three-axle trucks) and 5 (four-axle trucks and above). The company started collecting ECC from November 6, instead of November 1.

The pollution tax is aimed at encouraging trucks to use the NH 71 and the NH 71A. At present, trucks are avoiding these two highways connecting Rewari to Panipat via Jhajjar and Rohtak because of the toll they have to pay.