US confirms invite to Trump to be chief guest at RD celebrations : The Tribune India

NEW DELHI: The White House has confirmed that an official invitation has been extended to US President Donald Trump to be the the chief guest at India’s Republic Day celebrations in 2019. The White House has confirmed that an official invitation has been extended to US President Donald Trump to be the the chief guest at India’s Republic Day celebrations in 2019.

Days after it was first reported, White House Press Secretary Sarah Sanders confirmed the news, adding that the US response is yet to be finalised.

“I know that the invitation has been extended but I don’t believe a final decision has been made. I do know that both Secretary Matis and Secretary Pompeo will be travelling to India next month and will begin the dialogue and process and potential discussion for a presidential visit later in the year,” said Sanders during a regular press interaction.

US Defence Secretary James Matis and Secretary of State Mike Pompeo will be in New Delhi on September 6 for the twice postponed inaugural 2+2 dialogue with their counterparts Nirmala Sitharaman and Sushma Swaraj.

Discussions on a possible Trump visit are expected to take place among other pressing bilateral issues, including US sanctions on Iran as well as Russia. PM Modi had extended an invitation to Trump to visit India during his trip to Washington last year.

Trump’s predecessor Barack Obama was the first US President to be bestowed the honour of a January 26 invitation by Narendra Modi in 2015 in a move that surprised most, including critics.

While President Sukarno of Indonesia was the first head of state to be invited as chief guest in 1950 for the parade, the invitation has been extended five times to France and the UK, and four times each to Russia and Bhutan so far among other countries.

If Trump does accept the invitation, it will be for the first time that a head of state from a country is invited in close succession within four years. The Ministry of External Affairs has so far refused to comment on the subject.

“The US and India have a deep strategic partnership and we will continue to build on that partnership and advance cooperation. You will see that at the meeting that takes place with Secretary Matis and Pompeo next month,” added Sanders. 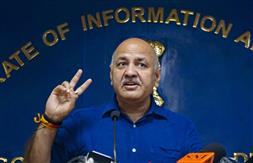