KURUKSHETRA: Haryana Education Minister Ram Bilas Sharma today defended “saffronisation” of the education system in the state saying there was nothing wrong in it. 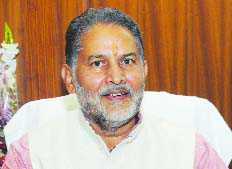 Haryana Education Minister Ram Bilas Sharma today defended “saffronisation” of the education system in the state saying there was nothing wrong in it.

The Education Minister said in spite of opposition by a section of people, the decision of the state government to include Bhagwad Gita in the school curriculum was a historic one and had been appreciated across the world.

“The circumstances created in the country over the past 60 years are evident. While the Sanskrit language has become all but extinct, Microsoft founder Bill Gates has admitted to Sanskrit being the language for computers,” said Sharma. “Embassies of 124 countries in India have put up boards outside their premises seeking Sanskrit scholars, who are in great demand. The language is crucial for India to become a world leader,” he said. Talking to mediapersons later, he said: “We will consider reintroduction of boards for fifth and eight standards while preparing the new education policy. The state government is committed to providing quality education to the younger generation.”

But the Education Minister avoided queries regarding directions given to Deputy Commissioners on blacklisting those private schools that didn’t participate in competitions related to the “Beti bachao, beti padhao” campaign from the Republic Day celebrations.