Why CBI does a good job when there is no political overtone to a case: CJI : The Tribune India

Why CBI does a good job when there is no political overtone to a case: CJI

NEW DELHI: Observing that the possibility of the CBI being used as a "political instrument" remains ever present, Chief Justice of India Ranjan Gogoi on Tuesday wondered how it was that the Central Bureau of Investigation could get a job well done in cases where there are no political overtones. 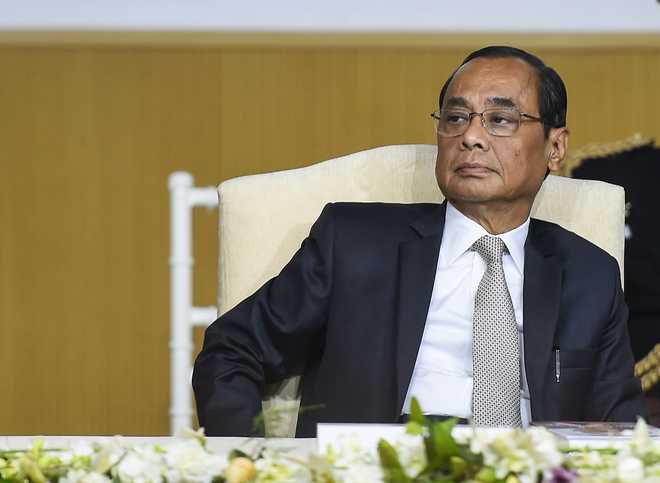 Observing that the possibility of the CBI being used as a "political instrument" remains ever present, Chief Justice of India Ranjan Gogoi on Tuesday wondered how it was that the Central Bureau of Investigation could get a job well done in cases where there are no political overtones.

Gogoi said that efforts should be made to "delink crucial aspects" of the CBI from the overall administrative control of the government.

Delivering the 18th annual DP Kohli memorial lecture, organised by the agency after a hiatus of two years, Gogoi said, "The CBI should be given statutory status through legislation equivalent to that provided to the Comptroller and Auditor General (CAG)." DP Kohli was the founder director of the CBI.

The legal mandate of the CBI must be strengthened by having a comprehensive legislation addressing deficiencies relating to organisational structure, charter of functions, limits of power, superintendence, and oversight, Gogoi said.

Listing out "imminent concerns" before the agency, he said superintendence and control of the agency continues to, in large measure, lie with the executive by virtue of Section 4 of the Delhi Special Police Establishment Act 1946, the "possibility of it being used as a political instrument" remains ever present.

"I have no doubt that there is more than enough strength within the organisation to deal with any such situation," he said.

He said many recommendations of the judiciary to reform the functioning of the Central Bureau of Investigation (CBI) have been accepted as it is by the central government.

"However, given the entrenched afflictions, the current challenge is to ascertain how to make the CBI functional as an efficient and impartial investigative agency fully motivated and guided by the objectives of service to the public at large, upholding the constitutional rights and liberty of the people, and capable of performing in increasingly complex time," he said.

The CJI categorised the "crucial concerns" regarding the CBI in five heads—legal ambiguity, weak human resources, lack of adequate investment, accountability and political and administrative interference.

Underlining legal ambiguities in the functioning of the CBI, the CJI said in order to conduct investigation into a state, consent of the concerned state is crucial.

"Given vested interests or bureaucratic lethargy, such consent is often either denied or delayed, severely compromising the investigation," he said.

Gogoi said a patchwork of legislations governing the functioning of the CBI adversely affects inter-institutional coordination, both horizontally and vertically.

"The result of multiplicity of institutions results is an aggressive competition for scarce resources and inter-institutional 'turf-war'," he said.

"Further, to address an increasing incidence of interstate crimes, an argument could be made for including 'public order' in concurrent list, for the limited purposes of investigating such crimes.

He, however, cautioned that autonomy without accountability would endanger the very objectives that animated the formation of the institution.

Gogoi also suggested filling vacancies in the CBI, training of its manpower to investigate technology-driven crimes, investments in research and personal, training, equipment or other support structures and maintain morale of the force by enforcing stringent internal accountability, concerning all aspects of the working of the institution.

He said as a multi-faceted multi-disciplinary investigating agency with a wide range of work, the CBI has for the most part enjoyed tremendous trust of the citizens.

Unfortunately, attention is more often than not drawn to failure than success of any public institution, he said.

"True, in a number of high-profile and politically-sensitive cases the agency has not been able to meet the standards of judicial scrutiny. Equally true it is that such lapses may not have happened infrequently," he said. Such instances reflect systemic issues and indicate a deep mismatch between institutional aspirations, organisational design, working culture, and governing politics, he said.

"Why is it that whenever there are no political overtones to the case, the CBI does a good job? A reverse situation led to the celebrated case of Vineet Narain vs UOI, wherein the SC expressing concern at the state of affairs, laid down explicit guidelines for protecting the integrity of the force," he said.

Given the intense scrutiny that working of the CBI is being subjected to, public perception of the agency must be of the highest degree, he said.

"Any gap between public perception and the quality of institutional performance would adversely impact the governance of the nation, which we can ill afford," he said.

He said these needs and challenges must be engaged with in all seriousness.

"But any engagement must be guided by two overriding principles - first, in a constitutional democracy, law is supreme; and second, 'we are dealing with right bearing citizens and not subjects'," Gogoi said. PTI