NEW DELHI: In what appears to be a serious lapse on the part of the security establishment, the command of the operation to flush out terrorists from the Air Force base at Pathankot was changed thrice. 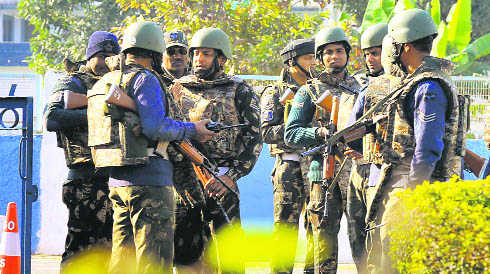 In what appears to be a serious lapse on the part of the security establishment, the command of the operation to flush out terrorists from the Air Force base at Pathankot was changed thrice.

It has emerged that at least three officers of the Army, IAF and the National Security Guard headed the operation at different stages. Sources said a review was being carried on this.

When the planning to counter the terrorists started in Delhi around 1 pm on January 1 —14 hours before the first shots were fired in Pathankot at 3:30 am on January 2 — two columns of the Army were rushed to Pathankot.

Around 1 am on January 2, two-and-a-half hours before the terrorists struck, an NSG team from Gurgaon landed at IAF base. Around mid-morning, the Western Air Command Chief, Air Marshal SB Deo, landed in Pathankot to “oversee” the operation.

The Director General of NSG, RC Tayal, arrived in the evening and “oversaw” the operation in coordination with the IG (Operations), NSG.

It was amid this confusion and rush to make claims that Union Home Minister Rajnath Singh was “wrongly informed” that the operations were over on January 2 evening. The minister tweeted so, only to delete the message a few hours later.

Among the questions being probed are whether the terrorists had a hideout in Punjab. Sources said since it has been established that the six terrorists were on Indian soil by 12:30 am on January 1 (when the first of the four calls  were made to Pakistan), they could not have roamed around on the streets carrying over 40 kg of bullets, 30 kg of RDX, guns and grenades for 26 hours when they attacked the IAF base.

Another question is how the BSF “failed in securing an unfenced portion on the right bank of the Ujh near Bamyal village in Punjab and who owns this land.

Another unusual thing was why the NSG, and not the Army, was told to carry out the operation when the "black cat" commandos are largely trained for urban combat such as the Mumbai attacks.

160 commandos: flew from Palam military airbase to the attack site on January 1

New Delhi: In remarks that could kick up a row, Tripura Governor Tathagata Roy said bodies of terrorists should be wrapped in pigskin and then buried. "I seriously suggest Russian treatment to terrorists' carcasses. Wrap them in pigskin, bury them face down in pig excreta.””

Mumbai: “India has sacrificed seven of its brave soldiers for Prime Minister Narendra Modi’s tea with Pakistan’s Prime Minister Nawaz Sharif,” the Shiv Sena said in an editorial in party mouthpiece Saamna on Monday. The Sena is critical of Modi’s engagement with Sharif.

Thiruvananthapuram: Hours after the last rites of NSG officer Lt Col EK Niranjan, Kerala’s labour department renamed the industrial training institute in his hometown Elumbulsherry in his honour. The ITI was opened in September last and was named Elumbulsherry Government ITI.