MURTHAL (SONEPAT): Vehicles with women passengers were reportedly stopped on the national highway near Murthal in the wee hours of Monday morning, they were dragged out into the nearby fields and raped. Though the police dismissed the incident as rumour, eyewitnesses said at least 10 women were sexually assaulted. 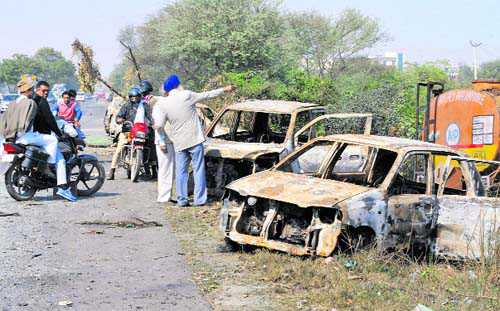 Vehicles with women passengers were reportedly stopped on the national highway near Murthal in the wee hours of Monday morning, they were dragged out into the nearby fields and raped. Though the police dismissed the incident as rumour, eyewitnesses said at least 10 women were sexually assaulted. Even worse, the victims and their families were reportedly advised by the district officials not to report the matter to anyone “for the sake of their honour”.

Sources said commuters going towards the National Capital Region (NCR) were attacked by 30-odd goons. Their vehicles set afire, most ran for shelter. Some women could not flee. They were pulled out, stripped and raped. Terrified, they lay still in the fields till they were found by their menfolk who came looking for them. Shocked, residents of Hassanpur and Kurad rushed to bring clothes and blankets for the victims.

"Three women were taken to Amrik Sukhdev Dhaba and united with their families in the presence of senior police officers. They appeared lifeless. District officials who arrived there, instead of investigating the matter, persuaded the families to take the women home. Many were provided transport," said an eyewitness, who did not want to be identified.

Residents of Hassanpur and Kurad, camping at Sukhdev Dhaba since Sunday after goons tried to set the eatery on fire, corroborated the account. Amrik Singh, owner of the dhaba, said they learnt about the incident at 3 am when some travellers heard the victims wailing. He said a blockade on the highway was removed by the security forces a kilometre away from the dhaba after a mild lathicharge. Some youths hid themselves in the fields. After the security personnel, who escorted the stranded vehicles, had left the site, some of them came out. “They threw stones at other vehicles that had arrived there in the meantime, forcing the occupants to flee. Some women who were left behind were sexually assaulted,” the eyewitnesses said.

Shaken up by the incident, village elders Hari Krishan of Kurad and Zile Singh of Hassanpur said they didn’t want to talk about the incident as “the police are sure to shield the criminals and nobody, not even the locals, are safe.” Jai Bhagwan, who too runs a dhaba on the highway, said four young women took refuge inside a water tank near his dhaba.

“We turned off the lights so as not to attract the attention of the goons. The hapless women remained there for hours till they were escorted out at daybreak.”

Several witnesses claimed that the rape victims were persuaded by “senior officers” not to pursue the matter on the plea that it would bring them a bad name and “what had happened could not be undone”.

A senior IPS officer said it was just a rumour and the media should refrain from writing anything that could create tension in society.

‘Stop madness, we all lose’

Chandigarh: Among an avalanche of messages on social network sites, one by chess player Anuradha Beniwal appealing to the Haryanvis to end “this madness” stands out. Speaking chaste Haryanvi, Beniwal implores the people (Jats) to give up violence and speaks of the futility of burning down public property raised from taxes.

“You suddenly went against everybody, saying Thakurs said this and Sainis said that. Don’t you have brains to think on your own? What you have burnt belonged to you. You have not burnt Pakistan’s or America’s buildings,” she says in anguish.

Contending that government jobs alone will not ensure progress, she asks as to who’ll invest in Haryana now.         — Sushil Manav

"My first coach was a Thakur and another a Saini. The coach who taught me the finer nuances of the game was from a family of goldsmiths. They did not ask me if I was a Jat or a Thakur, a Baniya or a Dalit. They only knew that I belonged to their own Haryana." — Anuradha Beniwal