JAMMU: Senior National Conference (NC) leader and former minister Ali Mohammad Sagar and other leaders of the NC, who were arrested a few days ago in Jammu and Kashmir, have been shifted to jails outside Jammu and Kashmir. 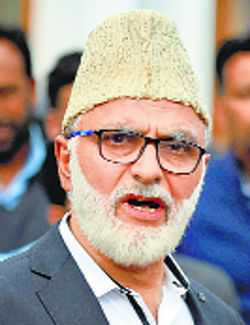 Senior National Conference (NC) leader and former minister Ali Mohammad Sagar and other leaders of the NC, who were arrested a few days ago in Jammu and Kashmir, have been shifted to jails outside Jammu and Kashmir.

Though Sagar was the first mainstream political leader being sent out of the state as part of a government plan to shift prisoners to jails outside the state, some political workers of the NC have also been shifted outside J&K.

Official sources said Sagar was shifted to a jail in Bareilly in Uttar Pradesh on Sunday. “Sagar was arrested on August 5 along with former chief ministers Omar Abdullah and Mehbooba Mufti. A total of 46 prisoners have been shifted out of Jammu and Kashmir so far,” sources said.

On August 10, the state administration airlifted 20 “potential troublemakers” from Srinagar to Agra, while at least 25 people were shifted as a precautionary measure in the wake of the revocation of Article 370 and creation of the two UTs.

The government has imposed strict restrictions in Jammu and Kashmir after the constitutional provisions that accorded state special status to the state were abrogated and it was divided into two union territories — Jammu and Kashmir and Ladakh.