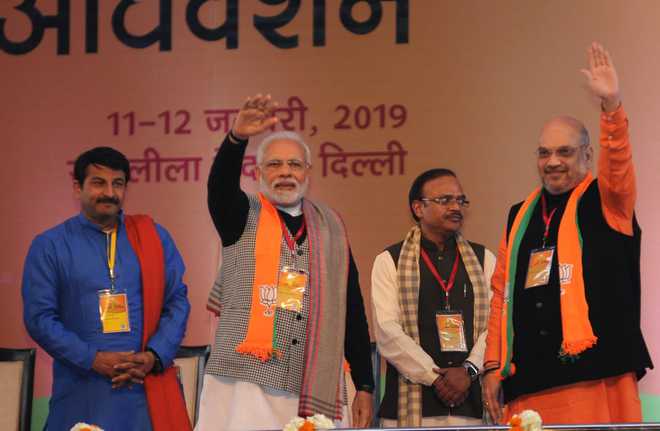 BJP president Amit Shah on Friday said NDA’s victory was certain in the 2019 Lok Sabha elections and called the ‘mahagathbandhan’ a charade.

In UP also, the Congress and the Samajwadi Party formed a coalition resulting in the BJP’s major victory in assembly elections, he said, speaking at the party national convention.

Dismissing the coming together of “bua- bhatija” Mayawati and Akhilesh Yadav affecting its prospects in UP in anyway, Shah said the NDA would win not a seat less than 73 that it won in 2014.

A day ahead of the expected big announcement by the BSP and the SP tomorrow, Shah said they know it is impossible to defeat Prime Minister Narendra Modi alone that is why they were coming together.

“We will repeat our 2014 victory in 2019, he said declaring Modi as the most popular leader with a pan-India appeal. Opposition knows it is impossible to defeat Prime Minister Modi that is why it is coming together in a desperate bid,” he said.

Calling the ‘gathbandhan’ an eyewash, Shah recounted the works done by the Modi government since 2014.

Chalking out the game plan for 2019, he recounted the BJP government’s decisive actions against Pakistan via surgical strikes, asking Congress president Rahul Gandhi to also specify his stance on the National Registry of Citizens.

National security should not be compromised for the sake of votes, said Shah, slamming the Congress and parties like TMC opposing the Citizens Amendment Bill.

Talking of India’s increasing might in the international arena, he said Indian passport was now a powerful document.

“When PM Modi went to Davos, he was given the honour of inaugurating the premises. His speech at Davos was a proof of India’s increasing glory,” Shah added.

“PM Modi left no stone unturned to nail corruption. Go to your voters with heads held high because he has not done anything wrong. People of India won’t be misled by Rahul’s allegations. I had also challenged Rahul Gandhi to prove his charges. Even when the SC also turned down all their pleas he kept repeating his lies.

“Even after Defence Minister Nirmala Sitharaman rebuked him in Parliament, he is still continuing with his Rafale narrative,” he said.

“You did not have the guts to oppose the reservation for upper castes and are calling us opportunists,” he said slamming the Congress.

“The Modi government has taken more than 50 historic steps during its tenure. It was under his tenure that the victims of the 1984 anti-Sikh riots got justice,” Shah said.

PM Modi ensured that leaders like Subhas Chandra Bose, Sardar Patel and BR Ambedkar get their due, the BJP chief said.

“Why did India not try to get Kartarpur Sahib Gurdwara in India at the time of partition? Now Modi has initiated the Kartarpur corridor so that people can pay respects there,” Shah said.

The loudest response from the audience came when Shah made the reference to the issue regarding building a grand Ram Temple at Ayodhya.

He accused the Congress party of hindering the process in the Supreme Court and said that the BJP remained committed to building the temple at Ayodhya.

Calling Modi ‘ajeya yodha’ Shah said he was working with Modi since 1987 and could assure that the party has not suffered a single defeat since then.

“He has committed his entire life to the party and India. Let us help the BJP return to power and no one can stop India becoming a ‘vishwa guru’. Go to the people with ‘josh’ but ‘hosh’ is also important. No one can give a ‘mazboot sarkar’ other than Modi,” he said asking everyone to resolve to bring the BJP back to power with a big majority and make Modi prime minister again.