JALANDHAR: In his bid to gain some ground in a relatively ‘un-chartered territory’, the New Democratic Party (NDP-Canada) chief Jagmeet Singh is undertaking a quick road show of some ridings (seats) of Quebec - virtually kick-starting his campaign ahead of rivals for the October 21 Canadian Federal Polls. 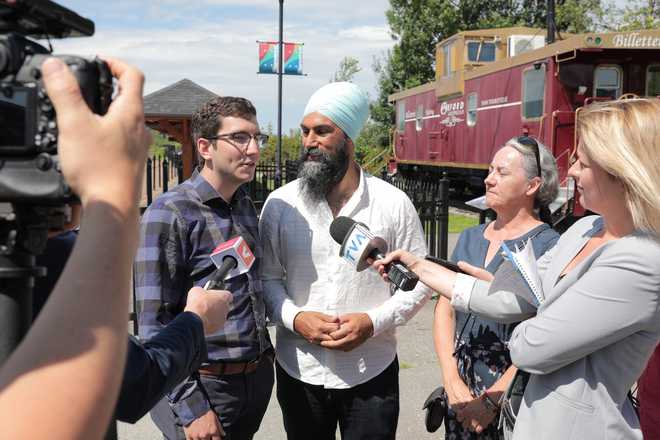 In his bid to gain some ground in a relatively ‘un-chartered territory’, the New Democratic Party (NDP-Canada) chief Jagmeet Singh is undertaking a quick road show of some ridings (seats) of Quebec -- virtually kick-starting his campaign ahead of rivals for the October 21 Canadian Federal Polls.

Jagmeet’s NDP was just holding 15 seats in Quebec. But he was hopeful of at least increasing the numbers or at least his party’s vote share. The NDP leader is holding a road trip in a number of those seats in Quebec where he thinks his party has some chances to improve its performance, even as winning them altogether might be an uphill task.

After kick-starting his road show from Montreal, Singh visited Sherbrooke in the Eastern Townships. After this, he will be trying his luck in central Quebec ridings of Berthier–Maskinongé , Trois-Rivières and Drummond. These quick road stops will be in nearly half of the 15 seats held by the NDP but where the party support has got ‘eroded’ sharply, as per different pre-poll surveys.

Seven other different surveys have placed NDP with less than 10 per cent support in Quebec. The party drastically went down after the NDP lost the federal byelection of Outermount—a seat held by former NDP leader Mulcair. Interestingly, it is Outremont where the NDP’s ‘orange wave’ had first start gaining ground after Mulcair’s victory in a 2007 byelection. Even prior to the party’s 2007 victory NDP has not been faring well in Quebec. It was a different matter that the party leadership could build up an argument that things were not as bright prior to its 2011 breakthrough when it cornered 59 seats in the province.

The biggest hurdle before Jagmeet was that he does not apparently have the level of ‘connect’ with people of Quebec which top party leaders like Jack Layton had in the province even as the edge for Layton had come that no other national party was being led by a Quebecer which won’t be the case this time around.

In Sherbrooke, the NDP had managed to stage victory by a margin of eight points in 2015 when the party had won Drummond by only four points after losing 21 percentage points since 2011.

Trois-Rivières was another seat the NDP had barely managed to hold its ground in 2015 with Robert Aubin’s support eroding by 18 points. He also could face a stiff challenge from the Conservatives this time around for the latter have put up long-time mayor Yves Lévesque as their candidate.

Almost all of the Quebec’s NDP held seats were in peril for the NDP has dropped about 16 points in Quebec since 2015 and it will be where Jagmeet’s magic might not work on expected lines. It was a different matter that Montreal could still prove to be a ‘safe ground’ for the NDP. A recent poll survey has found that just 20 per cent of Quebecers have a positive impression of Singh (lower than anywhere in the country) while 36 per cent hold a negative view pertaining to him.