How J&K’s bargain for autonomy failed

Conceptually, accession, India’s decision to hold a plebiscite, i. 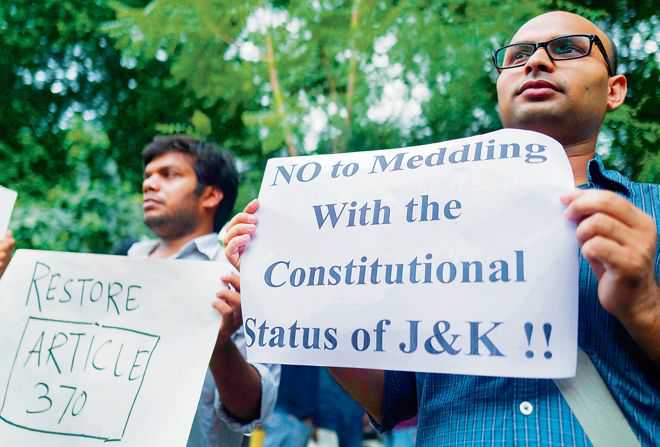 Conceptually, accession, India’s decision to hold a plebiscite, i.e. a reference to the people at the time of accession, the UN resolutions on plebiscite and, finally, autonomy are very different aspects of the J&K situation.

The accession was legally complete, with the Government of India’s acceptance of the Instrument of Accession signed by Maharaja Hari Singh on October 26, 1947. However, at the time of accession itself, India decided, as VP Menon notes in his classic Integration of the Indian States, "…a plebiscite would be held in the State when the law and order situation allowed.” VP Menon notes that the idea was mooted by Lord Mountbatten and that Nehru and “all other ministers” accepted it.

During intense bilateral India-Pakistan negotiations in November and December 1947 over J&K, India generally suggested a number of ways an impartial plebiscite could be held, including under the auspices of the United Nations. Pakistan rejected them all because with its engineered and led invasion of the state by the 'raiders', it knew that India would have succeeded in the plebiscite at that stage. Significantly, this plebiscite would have posed the question only if the people accepted the Instrument of Accession.

India has correctly asserted that the convening of the state’s constituent assembly through an election and the assembly's decision that J&K was an integral part of the Indian Union constituted and completed a reference to the people. In other words, it amounted to plebiscite.

India referred to the Pakistani aggression in J&K to the UN on January 1, 1948. Mountbatten was the driving force behind the move. VP Menon notes, “Nehru ultimately accepted the suggestion, though some of his colleagues had misgivings about the wisdom of the step.” My uncle has told me many times that he was present when Sir Tej Bahadur Sapru asked Nehru in February, 1948 on the wisdom of going to the UN as an “applicant”. Nehru remarked that a mistake had been made.

Pakistan did not fulfill the terms of the UN Resolutions and, hence, they could not be implemented. These resolutions have simply been overtaken by the passage of time. The clock cannot be turned back.

Stripped to its essentials, autonomy represented a compromise. The Kashmiri leadership led by Sheikh Abdullah accepted autonomy to give up both independence and accession to Pakistan as options.

Leaders like Jawaharlal Nehru had opposed the idea of a Centre with limited powers. An autonomous political entity necessarily puts limitations on the powers of the Centre. Thus, it was not principle but practical necessity flowing out of the 1947 situation that led Nehru to accept autonomy.

Nehru had to reconcile to the contradictions that emerged from the partition of India. He also believed that Sheikh Abdullah represented progressive social and political forces and would sincerely uphold the autonomy bargain. This hope was belied within a few years, but other Kashmiri leaders were willing to work on the basis of the autonomy bargain.

Article 370 was the constitutional manifestation of the political decision to have an autonomous state with special status. It evolved over time, but it attained a more durable shape and form after the Delhi Agreement of 1952 between the Centre and J&K on the ingredients of autonomy.

The first 25 years after Independence witnessed the increasing, but not full, extension of legal and administrative structures prevalent generally in the Union to J&K. This was with the consent of the state authorities in keeping with Article 370. The essence of autonomy lies in providing a choice to the autonomous unit to accept or reject laws. Obviously, this principle does not apply in areas which are vital to the security, external sovereignty and functioning of the Union.

The 1970s witnessed the consolidation of the autonomy principle when Sheikh Abdullah reached an agreement with the Union and returned to office. This happened after the break-up of Pakistan in 1971 when Pakistan was on the back foot.

The 1980s witnessed the rise of global Islamism with the Iranian revolution and Saudi Arabia’s assertive moves to push its version of Islam across the world. This impacted on the Kashmir Valley. Both separatist and pro-Pakistani forces in the Valley also got strengthened during the decade as the pro-autonomy leadership and the Centre made political mistakes. The Kashmiri leadership failed to take the other parts of the state and other religious groups along with it. Besides, its governance record was dismal. Delhi's intervention in state politics was clumsy and offended important sections of Kashmiri leaders, some with Islamist orientations.

Pakistan has never been reconciled to J&K's accession to India. Reversion, full or partial, is a national neurotic obsession. Like all such disorders, it has damaged Pakistan, but it cannot shake off its grip. Its response to the 1980s developments after the Soviet withdrawal from Afghanistan in February, 1989 was to give full and all-round support to the Islamists and separatist forces, pushing J&K into unending cycles of violence.

J&K’s autonomy bargain lay in tatters, with the Kashmir Valley falling prey to Pakistani-sponsored terrorism and separatism.  However, as the Centre grappled with the situation, it kept falling back since 1996 on constitutional processes based on autonomy. Both the Congress and the BJP did so. Indeed, the latter partnered the PDP in 2014 to give a government to the state.

On August 5, 2019, the BJP government decisively broke the autonomy model and ushered in a new era.