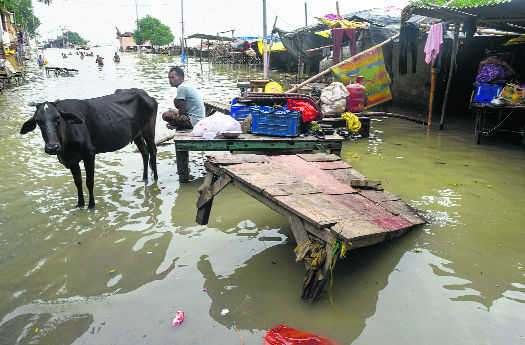 A man sits on a cot in a low-lying area flooded along the banks of Ganga at Prayagraj in Allahabad on Tuesday. PTI

As the flood fury continues to wreak havoc across North India, the National Crisis Management Committee (NCMC) today reviewed the prevailing situation in the states of Himachal Pradesh, Punjab, Haryana, Uttarakhand and Delhi.

A meeting of the NCMC, chaired by Cabinet Secretary PK Sinha, took stock of the current situation, preparedness, rescue and relief operations and directed that immediate assistance, as sought by the states, be provided to meet the crisis.

As of now, 28 NDRF teams are deployed in these states and resources from the Army and Air Force have been pressed into service.

Additional teams are also on standby for any exigency, an official release said.

The NCMC also directed to make available necessary financial assistance from the State Disaster Response Fund to the affected states.

Senior officials of the ministries of home and defence as well as those from NDRF, NDMA and Central Water Commission attended the meeting. Chief secretaries and other senior officials from the state governments participated in the meeting through video conferencing.

The IMD said the rain intensity in these states is likely to decline in the coming days. Meanwhile, a high-level committee, chaired by Union Home Minister Amit Shah, approved Rs 4432.10 crore of additional Central assistance to Himachal, Odisha and Karnataka, affected by natural calamities. Himachal was sanctioned Rs 64.49 crore to deal with the aftermath of avalanches and hailstorm.