KUALA LUMPUR:Controversial Indian Islamic preacher today apologised for his comments about race in multi-ethnic Malaysia which sparked calls for his expulsion, a day after he was questioned by the police. 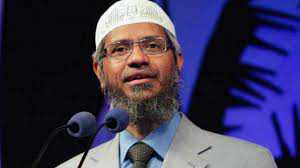 Controversial Indian Islamic preacher today apologised for his comments about race in multi-ethnic Malaysia which sparked calls for his expulsion, a day after he was questioned by the police. Zakir Naik, a radical television preacher, who called the 9/11 attacks an “inside job”, left India in 2016 and moved to largely Muslim Malaysia, where he was granted permanent residency.

He is wanted in India for inciting extremism and for money-laundering. New Delhi last year reportedly asked Malaysia to extradite him, a request that was rejected. Calls have escalated for Naik to be kicked out after he said Hindus in Malaysia had “100 times” more rights than India’s Muslim minority and suggested Chinese Malaysians be expelled before he was.

He was questioned for 10 hours Monday on suspicion of committing intentional insult. Naik said his detractors had taken his remarks out of context and added “strange fabrications”. — AFP