CHANDIGARH: The Privileges Committee of the Punjab Vidhan Sabha wants the Lok Sabha to take a call in a case of breach of privilege by former Deputy Chief Minister and SAD chief Sukhbir Singh Badal, who has been held guilty of misleading the House during the 2018 monsoon session. 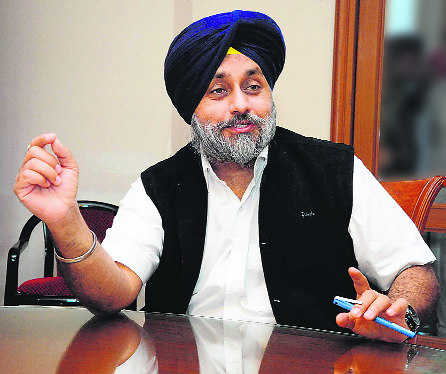 The Privileges Committee of the Punjab Vidhan Sabha wants the Lok Sabha to take a call in a case of breach of privilege by former Deputy Chief Minister and SAD chief Sukhbir Singh Badal, who has been held guilty of misleading the House during the 2018 monsoon session.

Last year, a panel of the Punjab Vidhan Sabha, headed by Cooperatives Minister Sukhjinder Singh Randhawa, while verifying the claims by the Akali Dal leader with regard to meetings between radical Sikh leader Baljit Singh Daduwal and Chief Minister Amarinder Singh at the latter’s residence and at a farmhouse in New Chandigarh, had submitted that all allegations levelled by the Shiromani Akali Dal president were false.

The committee had condemned Sukhbir for his “irresponsible” attitude to mislead the legislative Assembly by presenting unverified wrong facts. The report read: “Sukhbir might have done such misleading act just to divert people’s attention from the Justice Ranjit Singh Commission’s report indicting the Shiromani Akali Dal on sacrilege and October 2015 police firing cases.”

After going through the CCTV footage procured from the CM’s special protection unit, the committee found that Daduwal did not visit the Chief Minister’s residence on June 26, 2018, between 7 and 9 pm, as claimed by Sukhbir.

Before Sukhbir was elected as an MP, the Privileges Committee headed by Faridkot MLA Kushaldeep Dhillon had summoned the SAD chief four times, but he failed to appear.