Overseas transport of ‘birs’ only through chartered flights: SGPC

AMRITSAR: The “birs” of Guru Granth Sahib can only be transported overseas by a chartered plane. 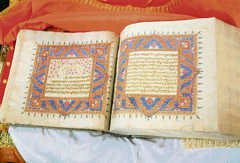 The “birs” of Guru Granth Sahib can only be transported overseas by a chartered plane. This decision was taken by the SGPC during the executive body meeting held at Gurdwara Ber Sahib in Sultanpur Lodhi recently.

The Sikh holy scripture is always in huge demand from individuals and Sikh institutions globally. There is no precedence for printing the copies of Guru Granth Sahib outside India. These are exported to the gurdwaras in the UK, US, Canada and Europe as per demand by devotees.

Earlier, objections had reached Akal Takht over showing disrespect to the holy book during transporting them in containers through sea route. A group of young Sikhs in Delhi had blocked a shipping container carrying 50 copies of Guru Granth Sahib from Gurdwara Rakabganj to Faridabad container depot.

The “birs” take two to three months by sea to reach the ports of Canada or America, besides the tedious procedures of immigration and security checks. Numerous complaints were received at Akal Takht that the dry port led to an insult to Guru Granth Sahib, besides the containers being contaminated.

Consequently, Akal Takht had directed that Guru Granth Sahib will be transported abroad only by air, and not by truck or sea route. On each such flight, the holy scripture would be kept separately on each seat of the aircraft after following the religious maryada (decorum).

SGPC chief Gobind Singh Longowal said the focus was that commuting mode of “birs” should never be disrespectful. “It has been decided that only air route could be allowed for transporting Guru Granth Sahib. If the devotees in abroad demand, they can ‘pool’ money to arrange chartered flight exclusively for transporting Guru Granth Sahib. The sewadar would be present on such flights who ought to ensure that ‘maryada’ is observed during the journey,” he said.

At present, there are only two facilities of printing Guru Granth Sahib in India, one in Amritsar run by the SGPC and the other in Delhi, managed by the Delhi Sikh Gurdwara Management Committee.

In 2010, the SGPC had also planned to set up a printing facility in North Carolina in the US on 2.5 acres, but the project never took off.

No printing facilities outside india

There is no precedence for printing the copies of Guru Granth Sahib outside India. At present, there are only two facilities of printing Guru Granth Sahib in India, one in Amritsar run by the SGPC and the other in Delhi, managed by the Delhi Sikh Gurdwara Management Committee.