States must shun use of terror: India, Bahrain

MANAMA:In a veiled attack on Pakistan, India and Bahrain today called on the international community to reject the use of terrorism against other countries and agreed to further enhance cooperation in security and counter-terrorism. 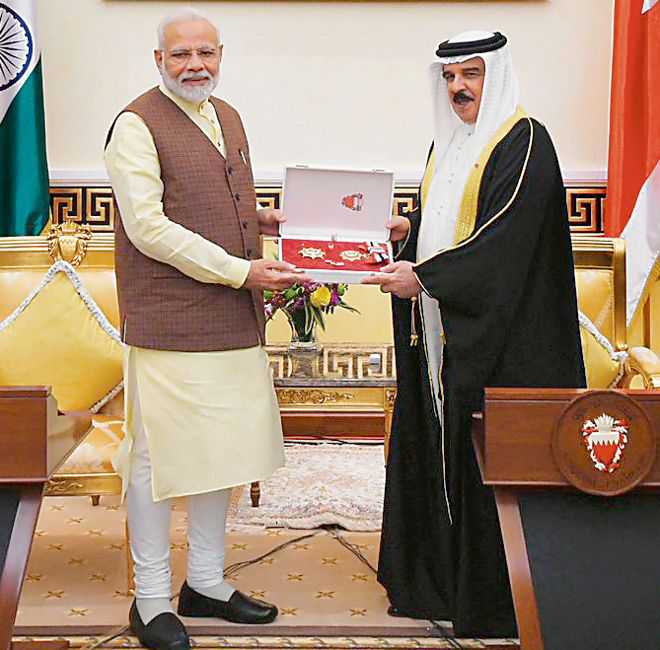 In a veiled attack on Pakistan, India and Bahrain today called on the international community to reject the use of terrorism against other countries and agreed to further enhance cooperation in security and counter-terrorism.

“Both sides called on all states to reject the use of terrorism against other countries; dismantle terrorism infrastructures where they happened to exist and to cut off any kind of support and financing to the terrorists perpetrating terrorism from all territories against other states; and bring perpetrators of acts of terrorism to justice,” an official statement said.

India and Bahrain discussed ways and means to prevent the use of cyber space for terrorism and radicalisation and noted the “need for concerted action by the international community against terrorism” and “the importance of comprehensive sanctioning of terrorists and their organisations by the UN”. — PTI

Bahrain on Sunday pardoned 250 Indians serving sentences in the Gulf nation during PM Modi’s visit to the oil-rich country. Saudi Arabia has the highest number of prisoners at 1,811, followed by the UAE at 1,392, says data

Pakistan’s Senate chairman Sadiq Sanjrani has cancelled his official trip to the UAE, a day after PM Modi was honoured with the Gulf nation’s highest civilian award during his visit