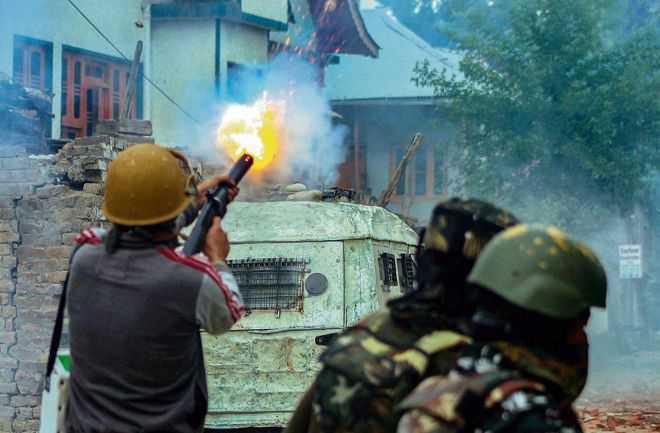 Elephant in the room: Problem of insurgency in J&K is older than its accession.

Insurgencies are always complex and generally need tailor-made solutions. The changes in the governance model brought about in Kashmir recently should slowly help alleviate some problems plaguing the Valley. China has had a problem of insurgency in the Xinjiang region. It has taken the approach of settling Han Chinese from the rest of the countryside, in that region. The population mix, which was 76 per cent Uighur Muslims and 6 per cent Han Chinese in 1949, today stands altered to 42 per cent and 40 per cent, respectively. Pakistan has also taken pre-emptive steps to settle outsiders in PoK. But we are neither China nor Pakistan.

India has had more than its share of insurgency problems since Independence and we have had our own successful model in play to solve them. The theme of most counter-insurgency campaigns in India has been about winning the hearts and minds of the people, combined with some tough measures against hardcore militants. Examples are Nagaland, Mizoram, Manipur, Tripura and Assam. The Punjab problem had a different solution because it was not an insurgency in the true sense. Indeed, India has handled its insurgencies so well that, the whole world, including the United States, looks up to us.

The elephant in the room is the problem of insurgency in Kashmir. This problem is much older than the state joining the Indian union in 1947. The Valley being largely a Muslim constituency, has had a serious discord with the Dogra rulers as well. One such eruption was on July 13, 1931 in which 22 Kashmiris were killed by the J&K police. The incident flared up into anti-Hindu riots in Srinagar. The uprising is observed by the Kashmiri Muslims, including those in PoK, as Martyr’s Day since then. This incident threw up the young Sheikh Abdullah as a leader of the Kashmiri Muslim community, against Maharaja Hari Singh.

In 1947, Pakistani raiders inflicted large-scale brutalities on innocent Kashmiris, particularly along the Uri-Baramulla-Srinagar road. This action did raise some anti-Pakistan sentiments in the Valley, but the flame of Kashmiri ‘independence’ continued to flicker. The Indian Army did not have much of a problem pushing the raiders out of the Valley. However, by the time the Army had cleared down the road to Muzaffarabad to a place little ahead of the strategic township of Uri, a critical situation developed in Poonch. The total force available on this strategic road axis was just one brigade worth, consisting of four battalions. It was considered prudent to hold the gains made on the Uri axis. The bulk of the force was diverted to relieve the garrison at Poonch. Having brought the situation in Poonch under control, the brigade reverted to Uri. By then, the winter had set in. The operations had to be suspended due to heavy snowfall.

In the summer of 1948, after the snow melted, the operations were sought to be resumed towards Muzaffarabad. However, it was discovered that Pakistan had pre-emptively moved in its regular army troops and occupied most of the strategic mountain heights opposite Uri. Some operations were attempted, but no significant gains could be made. An ambitious attack plan made by the Army to capture Muzaffarabad could not be executed due to the inadequate force level.

It is noteworthy that the UN-brokered suspension of hostilities between the two countries came into effect on January 1, 1949. It is widely believed in India that had it not been for the UN intervention, we could have captured the entire PoK. As Brigade Commander in Uri, I analysed the operations in 1947 and 1948. In my assessment, we did have adequate time to make more significant gains before the suspension of hostilities in PoK, but we did not have adequate force level at our disposal to do so.

After 1947, the Valley had a semblance of peace for 40 years. Kashmir was on a slow path to assimilation through political means till the 1987 state elections. Had it not been for rigging, the Muslim United Front could have gained 12 to 14 seats. Politically, this may have released some pent-up feelings and brought down the alienation sentiment. The resentment led to hundreds of Kashmiri youth crossing over to Pakistan for military training, which included the present leader of Hizbul Mujahideen, Syed Salahuddin. He had contested the state elections. The Kashmiri expression for independence has turned synonymous with jihad and vice versa.

In the early 90s, Pakistan started inducting into the Valley foreign militants, who had gone out of job in Afghanistan due to the Soviet withdrawal. The Army fought it out and brought the situation under control. Around 2008, having lost the military leg to the campaign, Pakistan changed its tactics in the Valley, to get the local Kashmiris indulge in agitational politics. The situation had been ripe for a political solution, but, unfortunately, it was not exploited. Beginning 2012-13, the spread of social media in the Valley enabled the most ominous resurgence of militancy, which created the cult of Burhan Wani. He glamourised militancy, which led to local boys joining his ranks. After his death in 2016, faced with mob attacks on security forces, the authorities opted for some tough measures. The beast of insurgency is such that if we apply extra force, we can kill more insurgents but cannot kill insurgency.

There has been a fair amount of euphoria in the country around revoking Article 370. An average Indian is anguished at the sight of bodies of soldiers flying back home from Srinagar for the past 20 years. Kashmir seems to have overdrawn on the goodwill of an average citizen, who seems to feel that the terms of doing business need to change. On the other side, the major problem itself in Kashmir all along has been its alienation from the rest of the country. This is despite the fact that the Valley is blessed with fairly rich local sources. Poverty is not a major issue. Indeed, the Kashmiris could have been a very rich segment had they not allowed militancy to throttle tourism in the Valley. A significant Kashmiri population does realise it and would like to break the shackles, but are unable to do so for the fear of radical elements ostracising them.

The moot point is whether the changes carried out in the mode of governance on August 5, 2019 would lead to positive results. No doubt, outside investment, better governance and better supervision of law and order should lead to positive outcomes. However, unless we rein in the beast of alienation, the results may not come quickly. The age-old theme of any campaign of counter-insurgency is about winning the hearts and minds. Development may or may not be the top issue of the problem. Therefore, there is a need to address issues all across the spectrum. There is surely a need to resume the democratic process. There is a dire need to address the sentiments of the young generation which can be done through social media. The Army has been slugging it out beyond the military operations to address this issue through the local and social media, but it lacks adequate resources and expertise. The government needs to take on social media issue and carry it out at a more professional plane.

Opinion battles have moved on to social platforms. What the Chinese are doing in Hong Kong is interesting. They are using Twitter and Facebook over virtual private networks. Very innovatively, they are playing it through the big fan clubs of two prominent celebrities who were criticised by some Hong Kong protesters for their pro-Beijing views. The whole plot was pre-planned, but very subtle.

It is time we caught up with the radicals and Pakistan using these platforms in the Valley. It calls for an enhanced sensitivity towards the Kashmiri students in the metros. Counter-insurgency is a battle of small steps taken over a period of time. Plenty of patience is needed.