Ram Jethmalani passes away at 95 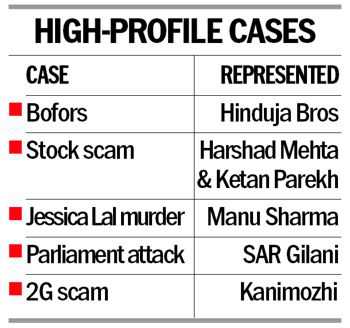 Veteran lawyer and former Union Law Minister Ram Jethmalani passed away here this morning. He was 95.

He is survived by his son senior advocate Mahesh Jethmalani and daughter Shobha, said to be settled in the US. His second daughter Rani died in 2011, while his other son Janak too died earlier.

Jethmalani was cremated in the presence of family members and a large number of people from fields of law, politics and journalism in the evening. Law Minister Ravi Shankar Prasad and SC Judge BR Gavai, too, bade him farewell. Mahesh Jethmalani lit the funeral pyre.

Born on September 14, 1923, in Sindh, Pakistan, Jethmalani was widely recognised as a doyen of legal profession. The lawyer-politician was elected Chairman of the Bar Council of India and the Supreme Court Bar Association. The sitting Rajya Sabha Member had the uncanny ability to be in the limelight.

Jethmalani fought several important cases and hit the headlines when he represented the killers of former PMs Indira Gandhi and Rajiv Gandhi.

He served as a minister in the Atal Bihari Vajpayee government and was elected twice to the Lok Sabha on the BJP ticket.

Vice-President M Venkaiah Naidu said the country had lost a great intellectual and a patriot.

PM Narendra Modi tweeted: “In the passing away of Shri Ram Jethmalani Ji, India has lost an exceptional lawyer and iconic public figure who made rich contributions both in the Court and Parliament.”