Weird indeed! India’s ruling party Member of Parliament from Arunachal Pradesh and the Army thereof making contradictory statements on the Chinese intrusion into, and the construction of a wooden bridge in the Indian territory! In public! Weirdness doesn’t end, because “facts of the case” have neither been rebutted nor denied the way it should have been done to make it effective and credible. 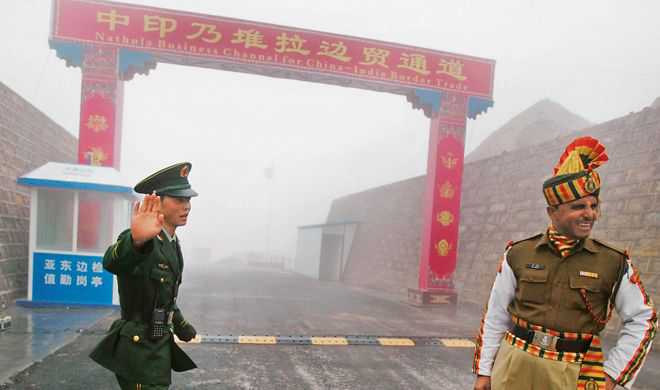 Power balance: India''s border has been violated in the west and north-west frontiers.

Weird indeed! India’s ruling party Member of Parliament from Arunachal Pradesh and the Army thereof making contradictory statements on the Chinese intrusion into, and the construction of a wooden bridge in the Indian territory! In public! Weirdness doesn’t end, because “facts of the case” have neither been rebutted nor denied the way it should have been done to make it effective and credible. In the process, both the Army and the ruling party MP appear to be cancelling each other out, thereby giving China the leverage to establish itself as a credible and trusted neighbour in the Indian psyche. Indeed, henceforth, it may not be surprising to see Indians taking the Chinese point of view more seriously than India's. Why? Because, the Indian establishment itself is divided.

What an irony! The MP from Arunachal East, Tapir Gao, himself is on record in front of the electronic media. On September 4, 2019, he said, “Chinese army made transgressions in the Chaglagam area of Arunachal in August 2019” and that the “area of transgression was around 25 kilometre north-east of Chaglagam and is very much inside Indian territory.”

Now the rebuttal to the sitting ruling party MP: Not by India to China. But India to India. A classic rebuttal. A repeat of “History of India”. When foreigners invaded India and expanded territories, at will and ease, deep inside Bharat, recruited soldiers from all corners of the countryside and made them fight against each other, under various banners, to subjugate and rule over warring, squabbling, quarrelling indigenous rajas, badshahs, sultans, maharajas, princes and principalities; exploiting to the hilt their land, resources and economics!

So, there came the reported Army denial. Not in the form of an(y) official statement, or through an official press briefing, but from behind the scene; coming, as it does, from "sources". No direct rebuttal, though, to allegations made by the MP on the Chinese entry into the Indian territory. "There is no permanent presence of the Chinese army in the area. It is under surveillance and our patrols are going there," said sources. "Sources indicated that the Chinese army did patrol the general border area in August." That was the gist of rebutting the ruling party MP. So? The Chinese came in August? Denial to acceptance!

In simple terms, China succeeded in dividing the rulers of India in public. In their own backyard. Not only did Indians themselves discredit India, but by taking a contradictory stand on the Chinese intrusion, they virtually went back to pre-1962 era of chaos, confusion and contradiction. Here lies the greatest danger. It gives a signal. That, Indians will find it hard to tackle Chinese onslaught, in all its forms, in unison, thereby allowing Beijing to enjoy a state of permanent upper hand in matters like the Sino-Indian border bilateral. When a sitting MP is openly discredited despite coming up with evidence, when the credible media report is rubbished as "mischievous", when Army "sources" do acknowledge that the "Chinese army did patrol the general border area in August", what does one say? How can one point a finger at the Chinese PLA or its Beijing masters?

Charity begins at home. All the more for so serious a matter as border/boundary of India, which since times immemorial has been violated with impunity in the west and north-west frontiers. And now, the new, unending pain in the eastern and the north-eastern neck of the nation! A question comes to mind. What is the 21st century India's stand on the Sino-Indian border, McMahon Line? Does India subscribe to the line or not? Assuming, without conceding, that McMahon Line needs a revisit, what does "Line of Control" (LOC) or "Line of Actual Control" (LOAC) mean? Does it exist? Has India taken note of the post-1962 voluntary retreat of China from McMahon Line? If China has voluntarily gone back, behind McMahon Line, what does it imply? Then, why violate McMahon Line and patrol deep inside India, going much beyond 25 kilometres of the said line?

Similarly, why always blame Nehru, who on the floor of Parliament on November 20, 1950, said: "Our maps show that the McMahon Line is our boundary and that is our boundary, (Chinese), map or no map"? Mark the date of Nehru's statement in Parliament: November 1950. Hardly a month after, the Chinese had invaded and forcibly taken Tibet in October 1950. Understandably, therefore, India had to take a stand on the Chinese aggression which touched its peaceful eastern border and for the first time in history disrupted the power balance. The backdoor of India was opened for the worst possible scenario.

Can, therefore, Nehru's stand on the Sino-Indian border be so vehemently castigated? Especially, in the background of the sustained and, now contemporary, Chinese aggression all across the neighbourhood? From Aksai Chin, which can be referred to as China-occupied-Ladakh (CoL), to CPEC of Pakistan-occupied-Kashmir (PoK) to McMahon Line to South China Sea and its islands to the Sea of Japan Senkaku Island to Hong Kong to Xinjiang to Taiwan to the Philippines to ASEAN?

One is constrained to pose a few unresolved puzzles. Does the 21st century north-eastern border of India fall under the operational jurisdiction of the Indian Army or not? Does the Army have to take permission from somewhere other than from the place of its operation and deployment, even when border incursions take place? Can it happen in Pakistan or Bangladesh borders? Brigadier John Dalvi, in his classic book Himalayan Blunder, made a memorable analysis of the gamut of the Sino-Indian imbroglio and pointed out: "The NEFA (now Arunachal) was under the Ministry of External Affairs...The NEFA officials and the Assam Rifles (also under the Ministry of External Affairs) did not relish the idea of the Army poaching in their territory and private domain. One responsible civil official is reported to have said, in January 1960, that the government was considering the withdrawal of the Army." Is history repeating itself on the China front? Have traditional confusion, contradiction and internal confrontation in the Indian establishment ceased or still haunt India? Are things becoming simpler and easier for the Chinese to keep India under leash in her own domain?

Leash or not, there is no doubt that India has to reorient and recalibrate its China policy on several fronts.

First, territory. Border penetration is a legacy story. Secondly, bilateral trade where too divergence is enormous, leading to a gargantuan gap in the import-export balance. Thirdly, telecommunication which constitutes a serious threat as it is more than capable of penetrating India's defence and security system. Then industrial. At the time of a serious downturn in India’s automobile industry, the entry of Chinese cars will do something which is beyond comprehension. Finally, diplomacy. All things taken together, going one way towards Beijing, has made the Chinese PLA venture into the Indian territory a virtual cakewalk. Indians themselves are not united and are unsure as to how to deal with the Chinese at this point in time, as was in the past. The point raised by the MP from Arunachal certainly deserved better. He did sound serious.