CHANDIGARH: Mention "notebandi" and an agitated Lakhbir Singh walks towards us. He opens his wallet and shows a coin of Rs 2 and another of Re 1. This is all he has. 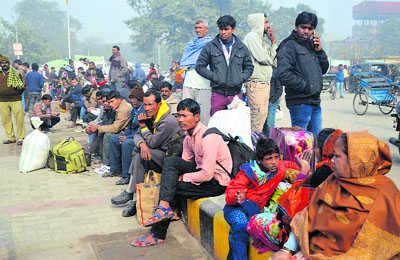 Mention "notebandi" and an agitated Lakhbir Singh walks towards us. He opens his wallet and shows a coin of Rs 2 and another of Re 1. This is all he has. It is almost sunset. Yet like him, many daily wagers gathered at Mohali's Madanpura Labour Chowk are still hopeful of finding work.

Lakhbir, who earns a living transporting goods on his horse cart, is surrounded by carpenters, porters and painters. On seeing a man approaching the chowk, they disperse in haste and gather around the potential employer.

Lakhbir says he doesn’t have money to feed his horse that is surviving only on grass. He has an injury on his hand. “I accidentally hurt myself yesterday while cutting grass. The doctor asked for Rs 50 for a tetanus injection. Since I have been without work since the past several days, I had no money,” he says.

We ask for his cellphone number. He says he doesn’t have a phone. "A week ago, my pregnant daughter-in-law fainted while standing in a queue outside a bank. The doctor, who said the foetus had suffered an injury, sought Rs 700. I mortgaged my cellphone to borrow money for her treatment,” he says, cursing the "good-for-nothing" government.

Not only in urban areas, but daily wagers in rural pockets too are reeling under the impact of demonetisation. Zora Singh Nasrali, president, Punjab Khet Mazdoor Union, says: " Rural labourers have been the worst-hit. During this time of year, there is little work in the fields. So, rural workers would visit nearby cities for work. Post-demonetisation, works in cities have come to a standstill. The rural workers have nowhere to go.”

Migrant labourers, who have neither identity cards nor bank accounts, continue to be paid in banned notes. For exchanging an old Rs 500 note, they are given Rs 400 and for the banned Rs 1,000 note, Rs 900. “Shopkeepers too exploit us. Even if we have a note of Rs 2,000, they force us to either spend the entire amount or make purchases from another shop,” claims Mahesh Kumar, a construction worker from Bihar. He curses the village 'mukhiya' back home for denying him and several others an identity card.

He says many workers employed at construction sites have returned home. “Owing to the cash crunch, most companies have halted work. How can we survive in such a scenario,” he asks.

“Modi Sahib has done well. He will surely deposit in our accounts the black money recovered by the authorities," he adds. Sunil Kumar from Bhagalpur shares his optimism. “I have heard that people in Ludhiana have already received the money,” he says innocently, provoking a hearty laughter.