Of spaces and curves 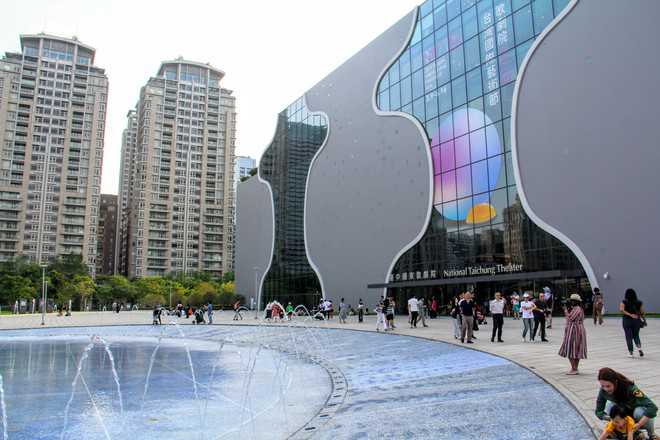 An Artistic feast: Technically complex, the structure is built around curved geometry. The building is made up of curved wall units — of concrete poured into steel shells Photos by the writer

It’s been called a ‘big block of cheese’, ‘a sound cave’and ‘the most challenging building to construct’. With a façade made of glass and concrete hourglass-shaped sections, fronted by dancing fountains and manicured lawns, National Taichung  Theatre is a path-breaking “biomimetic” building (a building whose design is inspired by nature) that defies all conventional rules about concert halls.

Located in Taiwan’s second largest city of Taichung, the country’s cultural capital, this 58,000-square-metre complex, which is surrounded by skyscrapers, has dramatic, fluid spaces where the walls and the ceilings seem to merge seamlessly; there are no supporting beams, columns or 90º walls. Its design is inspired by primitive caves and rock shelters — man’s first residences.

Designed by legendary Japanese architect Toyo Ito, in collaboration with Cecil Balmond, and built over 11 years, costing almost $135 million, the building offers people of Taichung a dose of culture from operas and plays to music. Ito has created a special place where the flow of air, sound and light is exemplary. High ceilings, colour pops of marine blue and maroon enliven the white walls, even the curving staircases and glass and metal elevators look like works of art.

Technically complex, the structure is built around curved geometry of what’s called catenoids (curved surfaces rotating around an axis). The building is made up of 58 such curved wall units — of concrete poured into steel shells. The architects collaborated with racing car engineers so that they could incorporate the structural and acoustic effects. According to Ito, this is a building that also resembles the sense organs — with eyes, a mouth, a nose and ear!

The gargantuan central foyer has ceilings as high as a cathedral. It has corridors that veer off in every direction, and small moats of water on the floor; there is a special water screen system to guard the building in case of fire with vents on the floor of the building that can douse the flames. There are open spaces for small pop-up design shops.

The Grand Theatre is a stunner in red and gold that can accommodate 2,000 persons. Its acoustic engineering ensures that each seat is able to experience the same sound effects. In marine blue, the Playhouse is the second largest space and the Black Box Theatre in the basement is an intimate space that can accommodate around 200 persons.

The white walls contrast with red carpets and white countertops and seats. On the roof is a sky garden offering views of the neighboring apartment blocks that tower all around. With walking trails, benches and abstract peaks and valleys, this is a wondrous space.

The avant garde building is not just beautiful; it’s also sustainable and energy efficient as well as earthquake resistant. Rainwater from the roof is collected and used for irrigating the landscape and grey water is used in the toilets. It has a special system of heat and cold distribution. During daylight hours, it adjusts its settings to the number of patrons in the theatre so that air-conditioning is at its minimum and also makes use of natural light as much as possible. On the façade of the building are small holes that allow natural sunshine and air to permeate the interiors in the day and the warm light to spill out in the nights.

Come night, and the building is under the spotlight as it so deserves to be! “The National Taichung Theatre is not just a building that houses the opera. The entire architecture itself is an opera,” noted Ito. One could not agree more.