BATHINDA: After an addict, Dheeraj Kumar (38), died under mysterious circumstances in a private de-addiction centre here on Saturday, the police registered a case against the owner on Sunday. 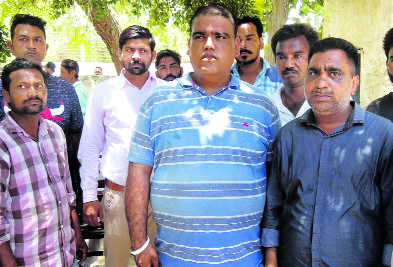 Relatives of the deceased wait outside the mortuary of the Civil Hospital in Bathinda. Photo: Vijay Kumar

After an addict, Dheeraj Kumar (38), died under mysterious circumstances in a private de-addiction centre here on Saturday, the police registered a case against the owner on Sunday.

The accused has been identified as Rakesh Kumar, who is the owner of the de-addiction centre. Besides the owner, the FIR was registered against unidentified persons on a complaint of deceased’s family members. The police have initiated a probe into the incident.

ASI Prem Kumar from the Civil Lines police station, said, “A case under Sections 304 and 34 of the IPC has been registered against the accused. We have been recording statements of family members and the accused. A probe is on and no arrest has been made so far.”

Meanwhile, the body has been handed over to the family after conducting a post-mortem examination.

Deceased’s brother Karan Gandhi said, “We want strict action against people responsible for the death of my brother. We are waiting for the post-mortem report and a thorough probe must be conducted. We have spotted injury marks on legs of my brother. Dheeraj was admitted to the de-addiction centre a few days ago.”

Jashanpreet Singh, an addict, who was transferred to the de-addiction centre at the Civil Hospital, said, “The incident that took place on Saturday scared me. I came to my home as the environment at the centre was not safe. My family had paid Rs17,000 for a month for treatment, but we were not getting a good diet. Officials at the centre even made us cook food and clean the building.”

The wife of another addict Ashmit from Chandigarh, who was admitted to the private de-addiction centre, said, “I was shocked to see injury marks on my husband’s body. It is not safe to stay here. I was not allowed to meet my husband by staff members of the centre. They also used an abusive language. We did not know that my husband would be held captive inside the de-addiction centre.”