ISLAMABAD: Pakistan''s Foreign Minister Shah Mahmood Qureshi has asked his countrymen not to live in a "fool''s paradise" as he highlighted that it will not be easy for Islamabad to get the support of the UN Security Council as well as from the Muslim world against India''s decision to withdraw Jammu and Kashmir''s special status. 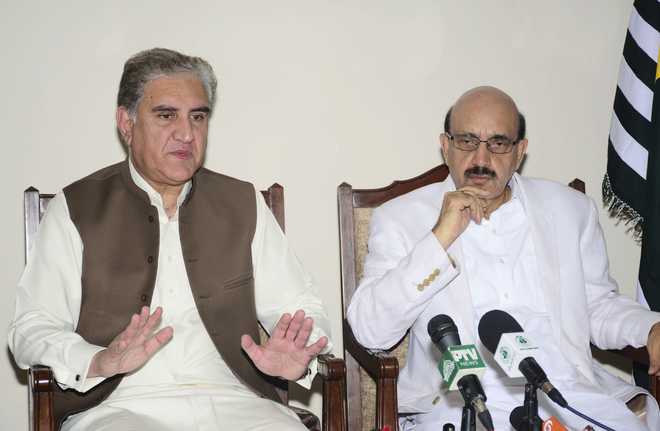 Pakistan's Foreign Minister Shah Mahmood Qureshi has asked his countrymen not to live in a "fool's paradise" as he highlighted that it will not be easy for Islamabad to get the support of the UN Security Council as well as from the Muslim world against India's decision to withdraw Jammu and Kashmir's special status.

Addressing a press briefing in Muzaffarabad in Pakistan-occupied Kashmir on Monday, Qureshi asked Pakistanis to "wage a new struggle" to get the support of the UNSC members.
Read more: Ambani to sell stake to Aramco, BP to make Reliance debt-free by March 2021
"You (people) should not in live fool's paradise. Nobody will be standing there (in the UNSC) with garlands in hands...Nobody will be there waiting for you," he said.
After India revoked Jammu and Kashmir's special status, Pakistan announced that it will approach the UN Security Council against New Delhi's decision.
The Pakistani foreign minister said they have written to the UNSC chief and sought an urgent session to discuss the Kashmir issue.
India has categorically told the international community that its move to scrap Article 370 of the Constitution removing the special status to Jammu and Kashmir is an internal matter and has also advised Pakistan to "accept the reality".
Without naming any Muslim country, Qureshi also said the "guardians of Ummah (Islamic community)" might also not back Pakistan on the Kashmir issue due to their economic interest.
"Different people in the world have their own interests. India is a market of (over) billion people. A lot of people have invested there (India). We often talks about Ummah and Islam but the guardians of Ummah have also made investments there (India) and they have their own interests," he said.
Qureshi's statement came two days after Russia becomes the first UNSC member to back India's move on Jammu and Kashmir, saying that the changes in the status are within the framework of the Indian Constitution.
"We proceed from fact that the changes associated with the change in the status of the state of Jammu and Kashmir and its division into two union territories are carried out within the framework of the Constitution of the Republic of India," the Ministry of Foreign Affairs of Russia said in a response to questions on Friday last.
The US has also maintained a neutral stand on the issue, saying that there is no change in its policy on Kashmir as it called on India and Pakistan to maintain restraint and hold direct dialogue to resolve their differences.
China, the all-weather ally of Pakistan, has objected to the formation of Ladakh as Union Territory by India. However, at the same time, Beijing has told Qureshi that it regarded both India and Pakistan as "friendly neighbours" and wants them to resolve the Kashmir issue through UN resolutions and the Simla agreement.
Qureshi had air-dashed to Beijing on Friday last week to seek Islamabad's support on Kashmir. PTI
SHARE ARTICLE

May refer pleas to decide validity of CAA to a larger Consti...