ISLAMABAD: Leaders of Pakistan’s political parties today warned that any attempts by India to unilaterally revoke the Indus Waters Treaty will be treated as an “act of aggression” and condemned India’s “interference” in Balochistan. 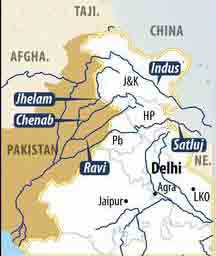 Leaders of Pakistan’s political parties today warned that any attempts by India to unilaterally revoke the Indus Waters Treaty will be treated as an “act of aggression” and condemned India’s “interference” in Balochistan.

In a joint statement, the leaders of the political and parliamentary parties at a special meeting chaired by Prime Minister Nawaz Sharif said they condemn the recent “unprovoked Indian aggression and repeated ceasefire violations that pose a threat to regional peace and security”.

The leaders were briefed on the situation along the LoC by senior members of the Cabinet and Sharif, days after India conducted surgical strikes on terror launch pads in Pakistan-occupied Kashmir in retaliation to the Uri terror attack and repeated ceasefire violations by Pakistan.

The leaders said they reject Indian efforts to “shift the focus from its brutal atrocities to suppress the indigenous uprising of the Kashmiri people to false claims of terrorism” across the Line of Control (LoC).

Amid reports that India may review the 56-year-old Indus Waters Treaty, the leaders condemned the “stated intent by India to use water as a weapon against the people, not only of Pakistan but of the region, in flagrant violation of its international treaty obligations and state that any Indian attempts at unilateral revocation of Indus Waters Treaty shall be taken as an act of aggression”.

The leaders from different Opposition parties expressed support to the government amid current tensions with India. They resolved that Pakistan remained firmly united in supporting the Kashmiri people’s right to self-determination.

The leaders also condemned “India’s documented interference in Balochistan, a federating unit of sovereign Pakistan” besides attempts to “destabilise” Pakistan as substantiated by the capture and confession of serving Indian naval officer from RAW Kulbhushan Jadhav.

On the postponement of the 19th SAARC Summit, which was scheduled to be held here in November, the leaders said they “regret Indian designs to scuttle all diplomatic efforts for bilateral and multilateral dialogue, including the refusal to engage constructively at the SAARC forum”. — PTI